Disney (NYSE:DIS) is beefing up its Florida theme parks, pulling out all the stops as Comcast's (NASDAQ:CMCSA) Universal Orlando is growing larger in its rearview mirror. Visits to Disney's Animal Kingdom have spiked this summer in light of the late-May addition of Pandora -- The World of Avatar. The gains at Disney's animal-themed park have reportedly come at the expense of the media giant's other Disney World attractions, but help is on the way.

Disney's Hollywood Studios will get Toy Story Land in 2018 and Star Wars Land come 2019. The House of Mouse has also announced that big changes are coming to Epcot. Disney hasn't promised any improvements to the Magic Kingdom -- Disney World's original attraction and the world's most visited theme park -- but that may be about to change. WDW News Today is hearing that a popular Tron-themed roller coaster that debuted at Shanghai Disneyland last year will be making its way to the Magic Kingdom in the coming years. 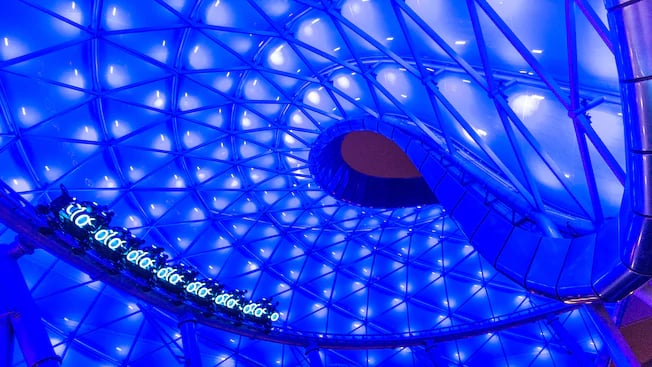 Tron Lightcycle Power Run is the glowing cycle-themed coaster that opened to rave reviews in China last year. WDW News Today is hearing that it will be replacing the Tomorrowland Speedway, one of iconic park's remaining original attractions.

It's a move that makes sense. Steering gas-powered hotrods over 2,000 feet of motorway track feels out of place in Tomorrowland. Tron's glowing cycles speeding overhead is a far better depiction of what even a retro look into the future that Tomorrowland promises should be.

Disney hasn't officially confirmed the chatter, but that may come as soon as this weekend when it hosts its annual D23 conference. It was during D23 two summers ago that Disney peeled back the curtain on Toy Story Land and Star Wars Land. It's widely expected that Disney will announce some of its plans for the already promised Epcot makeover. Introducing Tron Lightcycle Power Run into the Magic Kingdom's arsenal would be the cherry on top.

Disney's Magic Kingdom attracted 20.4 million guests last year according to industry watcher Themed Entertainment Association -- more than any other theme park in the world -- but that's still 0.5% fewer patrons than it entertained a year earlier. Comcast's two Universal Orlando parks saw their turnstile clicks inch higher in 2016. Comcast has been able to grow by adding marquee attractions annually. Disney has been relying on bunt singles until going for the long ball with Pandora this summer, but now it's swinging for the fences across all of its theme parks. We'll find out soon what's coming to breathe new life into Epcot, Disney's slowest growing park. If a Tron coaster is coming to give the Magic Kingdom a bar-raising boost in a few years, it will confirm that we're just getting started with Disney's theme park renaissance.