Back in 2015, a slide deck detailing Intel's (NASDAQ:INTC) Purley processor family (due to be formally announced on July 11) hit the web. The slide deck was quite detailed, going over virtually all the capabilities of the platform.

Interestingly, website VideoCardz has apparently gotten ahold of a slide deck detailing the Purley platform and it seems that two interesting features first described in the leaked slide deck didn't make it into the final product. 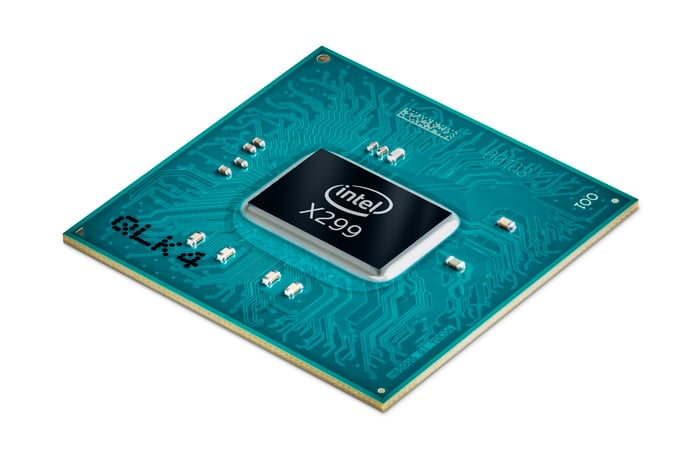 Let's go over them.

The slide deck from 2015 indicated that variants of the Skylake-SP processors that plug into the Purley platform would feature integrated FPGAs.

Since at the time that the slide deck leaked out Intel had not acquired Altera, it's unlikely that the chipmaker was talking about integrating FPGA technology directly into the Skylake-SP die. Instead, it was likely a multichip package, or MCP, which involves the processor die and the secondary chip (in this case, an FPGA) connected through the silicon package itself.

Such integration can speed up time to market, but it is less power efficient than full integration.

Based on the VideoCardz leak, it doesn't look like Intel is planning to offer a variant of Skylake-SP with an FPGA integrated on the package.

Another feature that the 2015 slide deck touted was "Cannonlake graphics & media transcode capability."

It's not clear how this feature would have been implemented, but I suspect that it would have been like what the company was probably planning with the FPGA-packing variants of Skylake-SP -- Intel would put a dedicated piece of graphics silicon on the same package as the main Xeon processor.

Chips built on two different manufacturing technologies can't be integrated into a single piece of silicon.

While this feature seems to have been scrapped for Skylake-SP, the concept probably isn't dead over the long term given the recent indications that Intel is interested in leveraging its graphics processor technology in data center applications.

Maybe Intel is saving this tech for Cascade Lake?

Intel has already publicly said that it's planning a refreshed set of processors for its Purley platform, known as Cascade Lake. Intel hasn't disclosed too many details about this refresh, but we do know that it's going to support Intel's 3D XPoint memory modules -- a technology that could help accelerate Intel's data center group-related revenues.

Perhaps, as part of this refresh, Intel will bring in some of the other technologies mentioned in that 2015 slide deck that didn't quite make it into the initial release of the Purley platform, such as the optional graphics accelerator as well as the FPGA.

Indeed, 3D XPoint technology was also listed on that 2015 slide deck, and we know that technology will now debut with Cascade Lake rather than Skylake-SP.

Combining these additional features in Cascade Lake -- a processor family that probably isn't going to be all that exciting a jump in terms of the CPU itself -- could make it a compelling refresh that could help Intel maintain momentum with its data center offerings.