Money and power: that's the theme of my three chosen dividend raisers from last week. In the wake of the Federal Reserve's annual stress tests for banks -- a process that also requires the Fed to sign off on capital allocation plans like dividend payouts -- two financials formally declared fresh increases.

Outside of that, the dividend-raise cupboard wasn't very full, but a noted utility did pull the trigger on its latest payout. Let's take that, plus our finance duo, down from the shelf for a closer look. 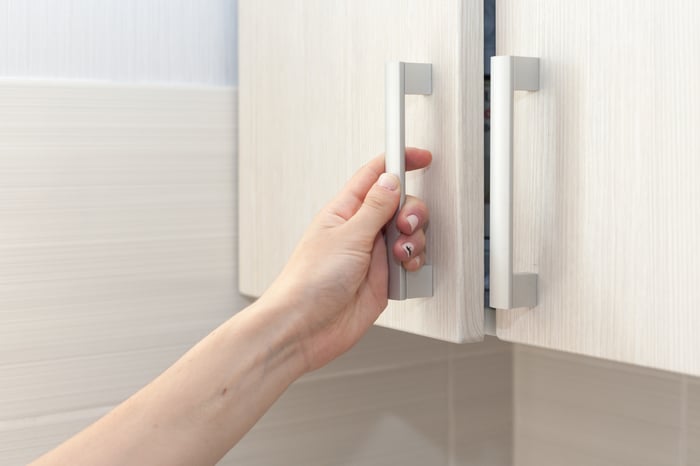 One of America's "super-regional" banks, PNC Financial Services (NYSE:PNC) isn't hesitating to lift its quarterly distribution now that's its received the green light from the Fed. A bit over a week after that bulb was turned on, PNC declared a chunky 36% raise to $0.75 per share.

Rising interest rates in a still-growing economy are lifting the fundamentals of many American banks, and PNC is no exception. In its most recently reported quarter, the company's total revenue grew by 6% on a year-over-year basis to $3.88 billion, with net income coming in 14% higher at just under $1.06 billion (although that, admittedly, was partly due to a weak year-ago quarter). Total assets, loans, and deposits crept up slightly. 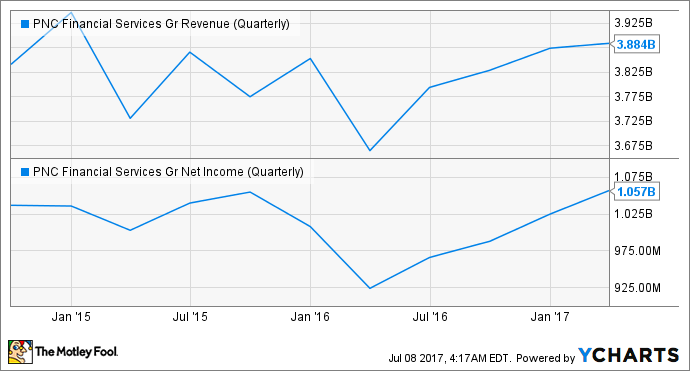 A rise in profitability means more dosh for dividends and share buybacks -- and there's plenty of room in PNC's case. The freshly raised payout and a planned $2.7 billion buyback program combined doesn't come close to touching what the company is booking in net interest income alone these days. I'd be optimistic about the future of this distribution if I were a shareholder.

PNC's new dividend is to be paid on Aug. 5 to stockholders of record as of July 17. At the latest closing share price, it would yield 2.4%. That's relatively high for big banks, and it exceeds the current 1.9% average of dividend-paying stocks on the S&P 500.

Although it's too small to be included in the Fed's stress tests, Bank of the Ozarks (NASDAQ:OZK) is nevertheless raising its quarterly dividend, just like its many peers that aced the exams. The company will up the payout a modest 3%, to $0.18 per share.

That might sound puny, but we should bear in mind that this marks the 28th quarter in a row Bank of the Ozarks has enhanced its payout. Across that stretch of time, when adjusted for stock splits it has risen steeply from $0.01 per share to the present level. 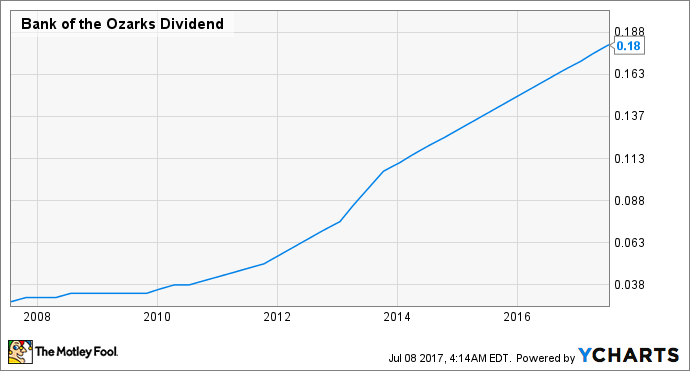 The Arkansas-based lender has been a standout performer for quite some time. Through a combination of very prudent lending and a raft of acquisitions since the financial crisis, it has managed to grow its footprint substantially -- its total assets increased more than sixfold, rising from $3 billion in early 2008 to over $19 billion as of the end of March.

We're just in front of the company's Q2 earnings release, with analysts expecting a profit of $0.73 per share, or 22% higher than in the same quarter last year. It wouldn't be a surprise if the bank exceeded that target; it's topped estimates in each of the past four quarters, and there have been few signs lately that its business is slowing down.

So I'd expect not only increased profitability from Bank of the Ozarks in its latest quarter, but I would also put my money on continued dividend raises going forward. For income investors, this stock is very safe and reliable.

Bank of the Ozarks will hand out its next distribution on July 21 to investors of record as of July 14. It would yield a theoretical 1.5%.

As is its habit, big utility Duke Energy (NYSE:DUK) has declared its once-per-year dividend raise. The company is lifting its quarterly distribution by 4% to $0.89 per share. 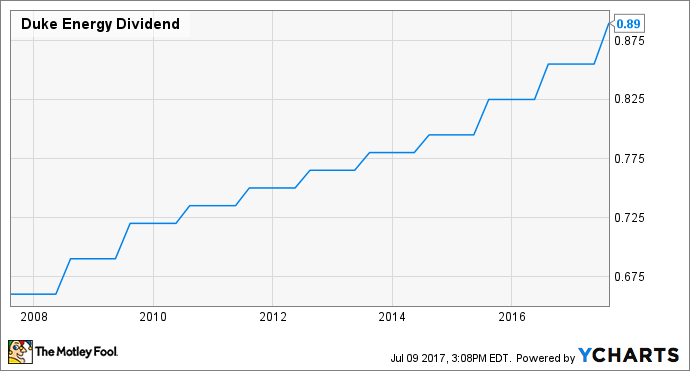 That consistency is admirable, because lately Duke Energy has been a company in transition. Over the past few years it's been refashioning itself into a utility powered by cleaner energy, moving away from its traditional input base of coal.

One of those new less-polluting assets, Piedmont Natural Gas, acquired in late 2015, was largely responsible for the nearly 7% year-over-year rise in Duke Energy's revenue in its most recently reported quarter, to just over $5.7 billion. Attributable net income followed along, increasing by 3% to $716 million.

A perusal of the company's cash flow statement, however, reveals that free cash flow has been fairly deep in the red lately, at $1.1 billion and $90 million in fiscal 2016 and 2015, respectively. Higher capital expenditures are the big culprit; that seismic shift from traditional to not-so-harmful production isn't cheap, after all.

However, CEO Lynn Good told analysts that Duke Energy's current strategy "does not contemplate" mergers and acquisitions, although it's keeping its eyes open for good opportunities. Considering that, I believe free cash flow will improve substantially and that the company will keep bumping its dividend higher.

Duke Energy's freshly raised dividend is to be paid on Sept. 18 to stockholders of record as of Aug. 18. It would yield 4.3% at the most recent closing share price.