Even after slumping 40% from its post-IPO peak, the company behind Snapchat still sports a ludicrous valuation.

Investors who bought into the hype surrounding Snap Inc. (SNAP -1.34%) are learning a painful lesson about the dangers of radically overpriced stocks. Snap went public in March and soared 44% on its first day of trading, earning a market capitalization in excess of $30 billion. That strong showing was despite the company's horrific financials. Snap produced just $404 million of revenue in 2016, along with a net loss of $514 million.

Snap's first quarterly report as a public company was a disaster. Revenue of $149 million marked a decline compared to the previous quarter, average revenue per user slumped 14% sequentially, and the number of daily active users rose by just 5%. Free cash flow was negative $173 million. Unsurprisingly, the stock tanked.

The bad news just kept on coming. Credit Suisse downgraded the stock on Monday, and Morgan Stanley, an underwriter for the company's IPO, followed suit on Tuesday, knocking its price target down to $16 per share. An NYU Stern professor commented on CNBC that same day that investing in Snap "is like driving drunk," claiming that it's "the most overvalued company in the world." While hyperbolic, I don't disagree. 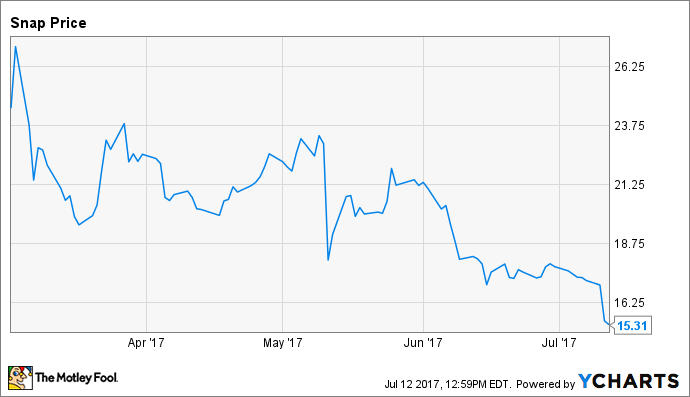 Snap stock has now fallen below its IPO price, tumbling about 40% from its post-IPO peak. Those hoping for a rebound should remember that, even now, the company is valued at an incredible $18 billion, nearly 45 times sales. There is no justification for that valuation. While the stock price will fluctuate, it has nowhere to go but down in the long run.

One problem that may prove insurmountable: The core features of the Snapchat app are being copied. Facebook's Instagram now offers similar functionality through Instagram Stories, a feature that boasts 250 million daily users compared to Snapchat's 166 million. Snap has been adding more features, including Snap Map, which allows users to see where people are posting stories nearby. But there's no reason to believe that the larger social media giant won't continue to copy Snapchat's best features.

Snap raised billions of dollars in its IPO, so the company has plenty of ammunition to spend heavily on product development and acquisitions. The Snap Map feature came from the acquisition of Zenly, which reportedly cost Snap between $200 million and $350 million. This followed the $125 million to $200 million acquisition of Placed, a start-up that ties in-store visits to ads.

The big question: What is Snap aiming to be? It's a camera company, according to its IPO filing, but some of these acquisitions don't make much sense if that's actually the case. Snap has more than $3 billion in cash on the balance sheet, but a combination of hurling money at expensive acquisitions and burning more cash than revenue each quarter will run that total down quickly.

In the near term, investors should also be concerned about the expiration of Snap's lock-up period. On July 29, early investors will be allowed to sell the stock after the standard lock-up period ends. With shares of Snap comfortably below the IPO price, and with one of the underwriters downgrading the stock, investors may look to dump the shares before the price falls further. This could put even more downward pressure on the stock.

Snap needs to grow revenue at a blistering pace in order to justify its valuation. Year-over-year growth is still strong since the company's user growth was solid until recently, and its efforts to ramp up its advertising business are still young. But that benefit will begin to disappear during the second half of this year as Snap laps stronger quarters.

If Snap continues to have the dual problems of failing to attract significant numbers of new users and being unable to raise per-user revenue, I don't see how the stock could possibly do anything but collapse.