The energy infrastructure giant creatively lined up the financing it needed to build its two largest growth projects.

One of Kinder Morgan's (KMI 0.98%) top priorities this year was to continue strengthening its balance sheet by funding its capital projects with internally generated cash flow until it lined up partners to help finance its largest growth project. The company accomplished that objective (and then some) via two brilliant moves. Because of that, the pipeline giant remains on track to provide investors with a meaningful dividend increase in 2018.

At the end of February, Kinder Morgan announced that it sold a 49% interest in Elba Liquefaction Company (ELC) -- which is building the Elba LNG Liquefaction project in Savanah, Georgia -- to funds managed by EIG Global Energy Partners (EIG). Under the terms of the deal, EIG paid Kinder Morgan $385 million at closing, which included a $215 million reimbursement for EIG's share of capital spent on the project to that point and $170 million to compensate Kinder Morgan for the value it created by commercializing the project. Meanwhile, EIG pledged to fund 49% of the remaining capital expenses on the $1.3 billion project. 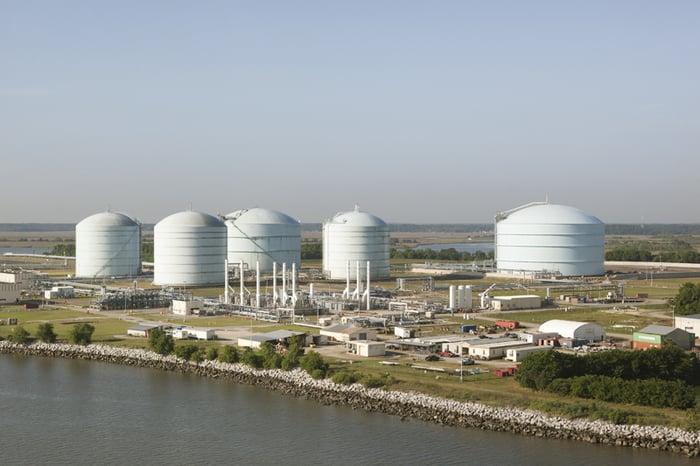 That deal was brilliant for two reasons. First, Kinder Morgan offloaded about $650 million in capital requirements, which will free up its cash flow for other purposes. In addition, the company unlocked $170 million in value, which gave it money to pay down debt. One of the factors leading to that incremental payment is that Royal Dutch Shell (RDS.A) (RDS.B) signed a 20-year deal to take 100% of the gas produced from this facility. That agreement with Shell locked in a steady stream of future cash flow, which increased the value of ELC above its capital cost, enabling Kinder Morgan to capture that value uplift when it sold the stake in the project to EIG.

Kinder Morgan was hoping to find a similar financing arrangement for its Trans Mountain Pipeline expansion project in Canada. In fact, its 2017 budget assumed the company would secure a partner to help fund a portion of the project's 7.4 billion Canadian dollars ($5.7 billion) construction cost. That said, to make sure it wasn't leaving any money on the table, its banks ran a "dual-track" process that included a formal process to attract joint venture partners while simultaneously exploring an IPO of its entire Canadian asset base. As a result of that process, the company settled on the IPO option, raising CA$1.75 billion ($1.36 billion) by selling nearly 103 million shares in Kinder Morgan Canada Limited (KML) in one of the largest IPOs in that country's history.

Kinder Morgan plans to use the CA$1.75 billion cash infusion to pay down debt, which will push its debt-to-EBITDA ratio from 5.4 to 5.2. Meanwhile, it will finance the balance of the CA$6.2 billion ($4.8 billion) of remaining capital spend on TransMountain with a blend of cash flow and new debt. In fact, the company has already lined up CA$5.5 billion ($4.3 billion) of financing for the project from financial institutions. Barring any delays, the company expects to start construction on the project this fall, which should put it into service by the end of 2019.

By completing these two brilliant moves, Kinder Morgan now has all the financing it needs to complete its two largest growth projects. As a result, the company will free up a significant slice of the roughly $4.5 billion of distributable cash flow its stable, fee-based assets generate each year. While Kinder Morgan has several options for that money, its management team has said on more than one occasion that the company plans to return a substantial portion of its excess cash flow to investors via a higher dividend starting next year.