Please ensure Javascript is enabled for purposes of website accessibility
Log In Help Join The Motley Fool
Free Article Join Over 1 Million Premium Members And Get More In-Depth Stock Guidance and Research
By John Ballard - Jul 13, 2017 at 7:39AM

The big auto parts stores have a new competitor in Amazon, which could make growth more difficult going forward.

Not surprisingly, shares of these companies have tanked since the beginning of the year after years of delivering market beating returns for shareholders. AutoZone, Advance Auto Parts, and O'Reilly are down 21%, 19%, and 12%, respectively, year to date. These stocks are even underperforming the SPDR S&P Retail ETF, which is down 6% year to date. 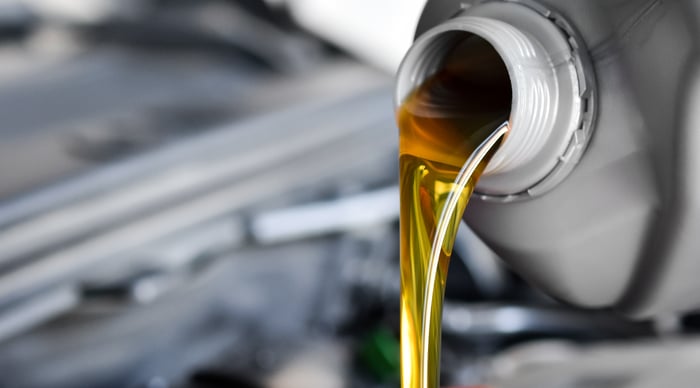 Auto parts stocks are running out of oil as quickly as this container. Image source: Getty Images.

These results come after a January 2017 report from the New York Post, which reported that Amazon.com (AMZN 4.03%) is quietly penetrating the $50 billion do-it-yourself auto parts market where the top auto parts stores have long been dominant. AutoZone is the most vulnerable to potential competition with Amazon since 75% of its revenue comes from do-it-yourself customers. Advance Auto Parts and O'Reilly have no more than about 50% of their revenue exposed to this market.

It's not surprising Amazon would be interested in auto parts, and not just because it's the "everything store". The major auto parts stores have experienced consistent growth over the last several years due to aging vehicles and car owners more willing to keep their current cars running longer rather than buy new ones. Just take a look at how well these stocks have performed over the last decade: 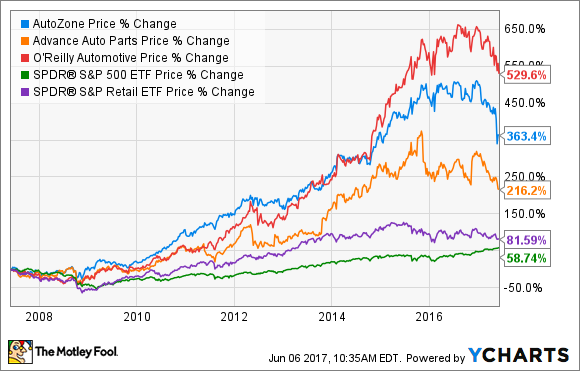 Amazon is turning up the heat

But the good times could be coming to an end depending on the extent to which Amazon can take market share. At the very least, Amazon will likely make it more difficult for auto parts stores to find growth over time.

AutoZone and O'Reilly blamed lackluster results partly on a delay in IRS tax refunds, which may have reduced the near-term spending power among lower income customers. However, Amazon, with its free shipping options and cutthroat pricing strategy to win market share, is not a competitor you want invading your turf. Especially one like auto parts, where the leading stores still control a minor portion of the total do-it-yourself market, leaving the door wide open for an aggressive disruptor like Amazon.

Amazon may be applying its aggressive pricing tactics to auto parts retailers. The New York Post story reported that Amazon has been paying manufacturers 30% more for merchandise, which means Amazon may be taking a loss on some parts. For example, a high-selling item like a five-quart container of Mobil Synthetic motor oil on Amazon is $37.00 (at the time of this writing) with free two-day shipping for Prime members, but the same product costs $43.61 from AutoZone including shipping (both prices exclude sales tax). Advance Auto Parts offers the same price as AutoZone, while O'Reilly charges one dollar more for the same product.

As a sign that it may be feeling the heat from Amazon, AutoZone is offering a free two-day shipping option, but the catch is you have to spend $200 to join the program. Amazon offers Prime for $99 per year, and you get a lot more for your membership than just free shipping, such as streaming movies, music, and exclusive deals available only to Prime members.

AutoZone and O'Reilly offer in-store pickup for certain items like the Mobil product mentioned above, but Amazon has already been rolling out same-day delivery to several major cities in the last few years. This might be Amazon's greatest advantage over these retailers long term. Amazon can spend billions getting closer to the customer by building its massive fulfillment centers near metropolitan areas, which gives customers same-day delivery on a vast selection of items.

The only real advantage auto parts stores might be able to hold over Amazon is offering customers the option of talking to a knowledgeable staff member in-store. However, shopping for auto parts has actually become easier online, because customers can now visit any major auto parts retailer's website, including Amazon, enter the make and model of their car, and immediately find the product they need.

The top three auto parts retailers have clearly been a fabulous investment in recent years, but with Amazon entering their territory on top of recent weak results, it brings a whole new level of uncertainty to auto parts retailers' future growth prospects.