Biogen (NASDAQ:BIIB) recorded $2.38 billion in product revenue in the first quarter -- a nice haul for a large biotech -- but 40% of its sales came from its top-selling multiple-sclerosis drug Tecfidera.

Not long after gaining approval from the U.S. Food and Drug Administration in 2013, Tecfidera passed Biogen's other multiple sclerosis drugs Avonex and Tysabri to become the company's best-seller, mainly because Tecfidera can be taken orally while most other multiple-sclerosis drugs have to be injected or infused.

Unfortunately Tecfidera sales growth has slowed, as it's probably taken all the market share it's able to take in the fairly crowded U.S. marketplace. In the rest of the world, its sales are still growing, and they only make up a little more than 20% of total sales, so there's potential for some growth ahead. 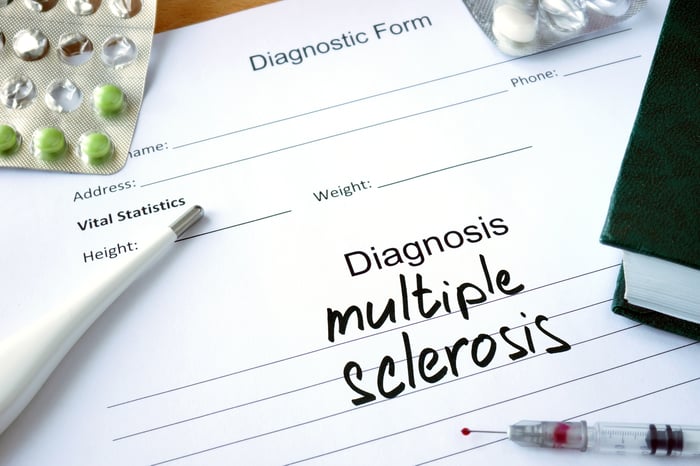 Close, but only half a cigar

It should be noted that Biogen's anti-CD20 drugs, Rituxan and Gazyva, combined for $1.04 billion of sales, besting Tecfidera. However, the company shares revenue on those two drugs with Roche, so Biogen only got $323.5 million of the $839.7 million in pre-tax profits from the collaboration. Biogen records that revenue, which is pure profit, below the product revenue line.

Given the split, unless the operating profits for Tecfidera are about half what Biogen and Roche manage for the anti-CD20 drugs, which seems highly unlikely, it appears Tecfidera remains the winner on the profit line.

A potential wildcard for the top spot

Tecfidera is headed toward being a $4 billion drug, but sales of either of Biogen's Alzheimer's-disease drug candidates, aducanumab or E2609, could substantially top that. Given the size of the market, the aging population, and the lack of effective medications, it's not hard to see how an effective Alzheimer's drug could hit $10 billion in annual sales or more.

Unfortunately investors are going to have to wait awhile to see if that revenue can materialize, since the phase 3 trials for aducanumab and E2609 aren't scheduled to finish until 2020. Also, while the data has been promising to date, the history of Alzheimer's-disease drug failures tells us that developing drugs for the disease is still very risky. Investors shouldn't pencil in sales for aducanumab or E2609 just yet.

With Tecfidera making up 40% of sales and the multiple-sclerosis market becoming increasingly crowded, investors should be looking for Biogen to diversify its revenue sources. That shouldn't be too hard; with revenue around $10 billion, Biogen really doesn't need a megablockbuster like aducanumab to move the needle. The plain old $1 billion kind of blockbuster would do fine. Or even two $500 million drugs.

Spinraza, Biogen's new drug for spinal muscular atrophy developed with Ionis Pharmaceuticals (NASDAQ:IONS), could certainly help with diversification. With sales of $47 million in its first full quarter on the U.S. market, the drug is off to a good start. Ionis and Biogen have a drug development pact that could produce additional drugs using Ionis' antisense technology.

Biogen might find that licensing drugs could be a quicker way to restock its late-stage pipeline. The company ended the first quarter with $5.7 billion in the bank, which isn't all that much compared to its big biotech brethren -- Gilead Sciences (NASDAQ:GILD) ended the first quarter with $34 billion -- so a few licensing deals would probably make more sense than one outright acquisition.

Between now and 2020 when the Alzheimer's drug's phase 3 trials read out, Biogen's stock will be tied to how well the company can compete in the crowded multiple-sclerosis market, and how quickly it can diversify away from it.

That could result in the company treading water, as the stock price has basically done over the last two years. Since there's no dividend to pay them to wait for better times ahead, risk-averse investors would be better off waiting for signs of success. You'll miss some upside, but avoid the risk of investing in a market-trailing performer if management can't execute.

How Biogen Inc. Makes Most of Its Money @themotleyfool #stocks $BIIB $GILD $IONS Next Article
Current