The operating picture is brightening for this software specialist.

Pegasystems (PEGA -3.51%) shareholders have trounced the market so far this year. According to data provided by S&P Global Market Intelligence, the stock gained 62% through the first six months of 2017.

The rally sent the business-management software specialist to a record high of nearly $64 per share in early June: 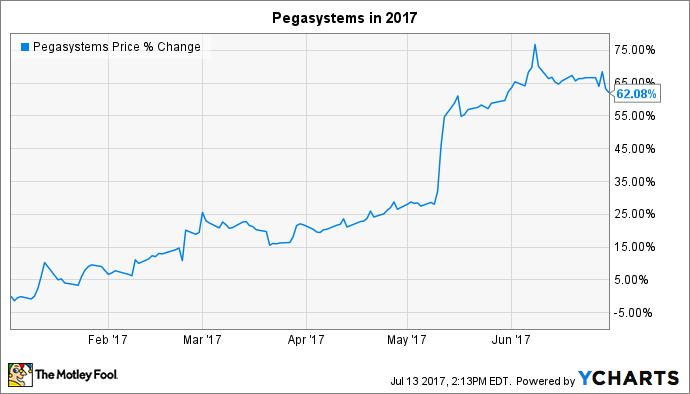 Pegasystems' stock began climbing after fiscal fourth-quarter results, released in February, implied that a sales rebound was in the works. Sure, revenue slipped by 2% for the period. However, CEO Alan Trefler and his team noted a 26% spike in backlog that pointed to a brighter future ahead.

Pegasystems paired that accelerated growth with higher profit margins and a doubling of operating income, as earnings per share improved to $0.33 from $0.13.

Pegasystems left its full-year forecast in place, targeting 15% sales growth for a solid boost over 2016's 10% uptick. The best news for the business, however, is that a larger proportion of those sales are coming from subscription and cloud-based services, which are both more profitable and less volatile than the outright product purchases that used to dominate Pegasystems' revenue base.

The company's quarterly numbers can still swing based on the timing of a handful of larger contracts, so investors shouldn't expect a straight climb to that 15% figure. Yet the bigger picture shows a business that's enjoying firming sales growth and a solid expansion of operating margins.