Shares of The New York Times Company (NYSE:NYT) have climbed 33% this year, according to data from S&P Global Market Intelligence, riding a broad-based comeback in the newspaper industry.

Demand for newspapers and other media has risen in the Trump era, providing a so-called "Trump bump" for newspaper stocks like the Times. As the chart below shows, the company's shares surged following its May earnings report for the first quarter -- the first full period after the election -- on strong subscriber growth: 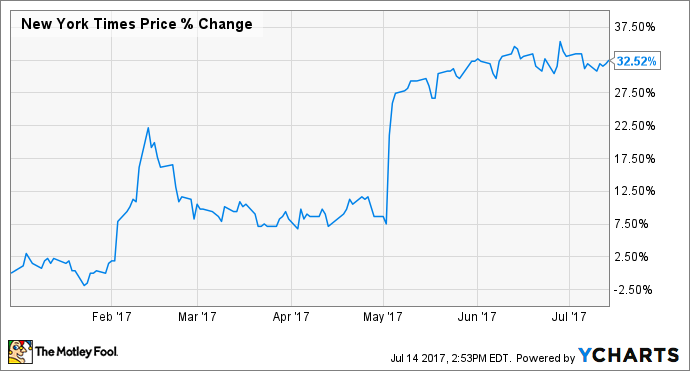 Newspapers reported record digital subscriber growth in the first quarter, and the Times, often called the United States' "paper of record," was no different. The company added 308,000 net subscribers in the quarter, a record, and digital advertising revenue grew 19%. Overall revenue was up 5% to $398.8 million, beating expectations of $385 million, as the company continues to cope with a long-running decline in print circulation and advertising. On the bottom line, adjusted earnings per share increased from $0.10 a year ago to $0.11, topping estimates of $0.07.

The stock gained 13% on the news and tacked on another 7% over the next few sessions, rallying to the level it holds today.

The stock also got a more modest boost after its fourth-quarter earnings report in February, when it gained 6%. The company added 276,000 digital subscriptions in that quarter.

At the end of May, the paper announced a plan to streamline the newsroom which included laying off some staff. The move was greeted with protests by some in the editorial department, but the stock did not react.

The Trump bump won't last forever, but it's certainly been kind to the Times and should help push subscriber growth at least through the year. The key question for the company is whether it can leverage that growth to boost profits significantly. Over the last two quarters, it hasn't been able to do that, but eventually the decline from the print division should smooth out. Total digital news subscribers are up by 65%, a remarkable surge, and will continue to grow. However, the stock's valuation will start getting stretched if profit growth does not follow.