The electronic cigarette market is growing  -- the global industry that includes vaping is forecast to expand from less than $10 billion now to over $50 billion by 2025 -- and many are looking to invest in this trend. While this new and purportedly less harmful take on smoking has gained momentum, investors should be leery about jumping aboard the bandwagon.

Stiff government regulations and education campaigns around the world to alert people to the dangers of smoking have helped push the number of cigarettes sold down despite how addictive they are. Global sales volumes have declined from a peak of about 5.8 trillion cigarettes in 2012 to 5.5 trillion sold to 1 billion smokers in 2015. The number of cigarettes sold is expected to decrease another 5% over the next five years, or a reduction of roughly 275 billion cigarettes.

Tobacco companies have more than made up for volume declines with price increases, and new technology has emerged to appeal to those kicking (or trying to kick) the cigarette habit. So-called reduced-risk tobacco products include vaping devices that heat a flavored, nicotine-infused liquid into a vapor that is inhaled and heat-not-burn (HNB) devices that heat real tobacco to deliver a vapor that tastes similar to a conventional cigarette. 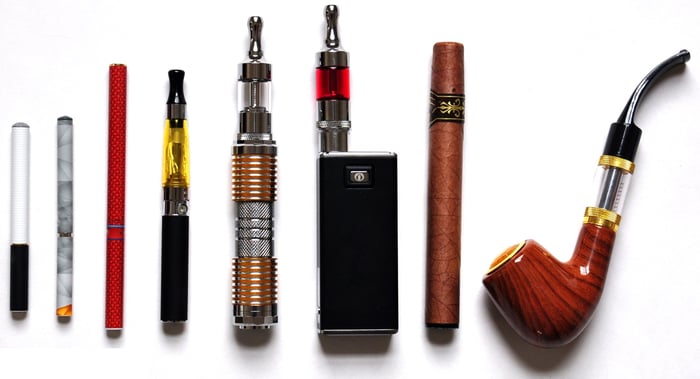 The various e-cigarette products are still subject to regulatory scrutiny, but big tobacco companies have been diligent in their studies to try and prove that vaping is a lower risk habit than smoking and Philip Morris says its heat-not-burn IQOS device heats tobacco to much lower temperatures than a traditional cigarette and thus "the levels of harmful chemicals are significantly reduced compared to cigarette smoke." It's asked the FDA to deem the device, which will be marketed in the U.S. by Altria, a "modified risk tobacco product."

The bet is that vaping and HNB devices will provide the much-needed growth to replace lost cigarette sales in the years ahead.

The stars of the show

A few years ago, big tobacco went shopping and bought up and/or launched alternative product lines. Outside of a handful of private companies and questionable penny-stock companies that sell e-cigarette products, investors are left with the big names if they too want to bet on this future of smoking.

*Includes the acquisition of the Newport brand of cigarettes in June 2015. Excluding Newport, volumes decreased 2.6% for the year. Chart by author. Data sources: Yahoo! Finance and company quarterly earnings reports.

Big tobacco doesn't break out specific details on new products yet, but a few tidbits are worth mentioning. Philip Morris said its global heat stick shipments, driven primarily through its IQOS system, were up to 7.4 billion units compared with 396 million in 2015. Altria, the parent company of Philip Morris in the U.S., said NuMark held 55% of U.S. e-cig sales in 2016 even as it works on approval from the FDA to sell IQOS stateside.

The main takeaway: Investing in "vape stocks" is probably going to mean investing in big tobacco.

While initial growth has been impressive, scrutiny over potential health concerns and intervention from government agencies have put the brakes on vape products in some markets -- including the U.S. Ultimately, what was initially thought to be a major growth catalyst is simply helping big tobacco offset losses in cigarette sales.

But what about those big revenue gains at the companies? Don't be deceived. Most of those gains are from the previously mentioned price hikes in traditional tobacco and mergers and acquisitions between the remaining tobacco companies. For example, British American Tobacco is buying out Reynolds American, in a deal that is expected to close in the next few months and help the two companies drive profitability by saving on costs. E-cig and vaping businesses are still very small compared to traditional tobacco businesses, and have a minimal impact on the bottom line at this point.

There is also a moral consideration with e-cig businesses. While tobacco companies like Philip Morris have released scientific studies showing their new products have lower health risks, some of the same health concerns that traditional smoking has presented are still in play.

With the e-cig industry small, under the control of big tobacco, and full of question marks, it may not be the opportunity investors think it is.