Costco Wholesale (NASDAQ:COST) was a game changer in retail with its warehouse locations and its membership-based business model. By charging customers up front to shop at its stores, Costco can afford to slash its prices to the bare minimum, driving sales higher. One area where Costco doesn't look as impressive is in its dividend yield, which is well below the average for the stock market as a whole. Yet focusing solely on the yield of its regular dividend is a huge mistake for income investors, because Costco has taken an unconventional approach toward returning capital to shareholders.

How Costco has boosted its regular dividend over time

By all accounts, Costco has done a good job of promoting dividend growth recently. Since 2004, the company has made annual increases to its regular quarterly payouts, and the net result has been a fivefold increase in its dividend over that span. Annual increases of roughly 10% to 15% have been standard throughout that time frame, and even the recession of 2008 didn't lead to a slowdown in Costco's dividend growth.

The problem for many income investors is that even with that growth, regular dividends never seemed to be the priority for Costco. When it first started paying a quarterly dividend in the mid-2000s, the payout worked out to about a 1% yield. The short-lived decline in the stock price during the market meltdown briefly lifted that yield toward the 1.5% mark, but as shares recovered, the yield dropped back downward. Throughout the 2010s, the yield has consistently remained in roughly a 1% to 1.5% range. 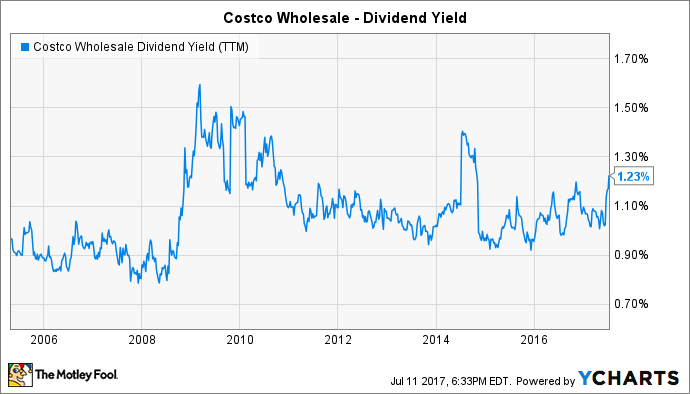 If all you looked at was Costco's regular quarterly dividends, then you'd miss a huge part of the company's philosophy toward returning capital to shareholders. That's because Costco has instead embraced the idea of special dividends on a semi-regular basis, and that has dramatically increased the net benefit to longtime Costco shareholders from payments received from the company. 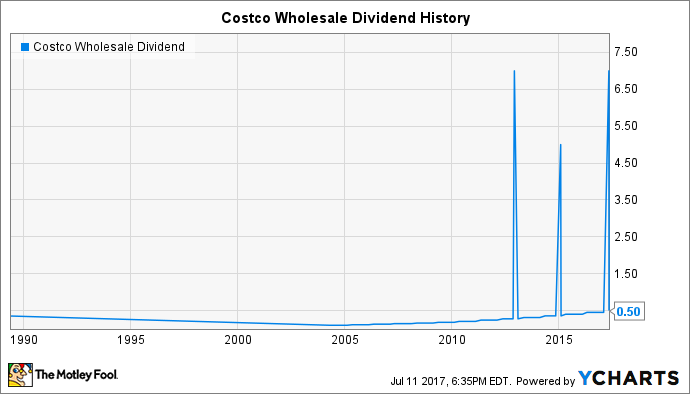 Costco began this trend in late 2012, when it declared a special $7-per-share dividend. At the time, many investors thought that the move might be a one-time event, because it came immediately before a tax increase took effect that threatened to increase the burden on shareholders receiving dividends. Based on Costco's share price at the time, the special dividend added more than 7 percentage points to the stock's effective dividend yield, putting it among the top-yielding stocks in the market. Interestingly, Costco used debt to raise the cash that went out to shareholders, raising some concerns about leverage but taking advantage of low interest rates in the credit markets.

Costco repeated the event in early 2015, paying a $5-per-share special dividend. Strong fundamental performance helped justify the move, with ample cash flow giving the company the latitude to make the payment. Costco also cited "additional borrowings" as a source of funds for the special dividend.

Finally, Costco again resorted to a special dividend earlier this year, going back to the $7-per-share amount. CFO Richard Galanti explained the move, noting that "our strong balance sheet and favorable access to the credit markets allow us to provide shareholders with this dividend, while preserving financial and operational flexibility to continue to grow our business globally."

Here's what to expect from Costco dividends

Some believe that Costco should simply raise its regular payout rather than rely on special dividends to boost its otherwise lackluster dividend yield. The current philosophy, however, gives Costco flexibility to handle its financial affairs more effectively, choosing when and how it wants to make major returns of capital to shareholders. Costco investors should expect the current way of doing things to continue for the foreseeable future, and given the stock's long-term performance, many wouldn't have it any other way.