Cirrus Logic (NASDAQ:CRUS) develops hardware and software for audio and voice signal processing. And while the details of what these products do can get pretty complicated, the company's business model is a lot simpler, with most of its revenue coming from the smartphone market -- 79% of it from Apple (NASDAQ:AAPL) alone.

At a recent conference appearance, Cirrus CEO Jason Rhode provided some interesting nuggets about the company's relationship with Apple, the competitive environment, and the size of the company's digital headset ambitions as Android device makers continue to transition to USB-C connectivity. 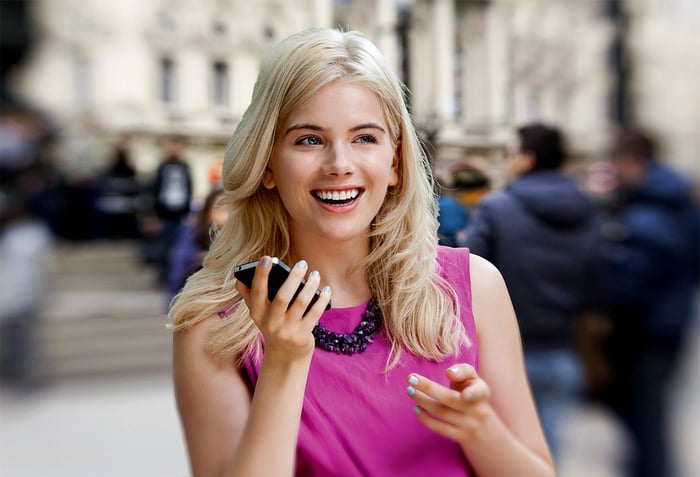 1. Things are humming along with the customer who must remain nameless

Due to company policy, Cirrus won't talk about its work for Apple directly. However, when Cirrus refers to its "largest customer," it's no mystery. Over the last several years, Cirrus' fortunes have been tied largely to iPhone sales, and its reliance (for now, anyway) on one customer for such a large portion of sales can make a lot of potential investors nervous.

Rhode says, however, that people tend to forget that a lot of the products Cirrus develops are highly customized for its customers, which takes a lot of time and investment, implying that the risk of Apple looking elsewhere is fairly low.

"Any time we do a custom device for somebody, getting it right involves a lot of back and forth between the engineers, so I think there's more stability there -- and more visibility of a sort -- than I think people on the outside realize."

Responding to a direct question about whether Apple would ever create its own audio or voice chips, Rhode said that while there's always some fraction of what Cirrus provides that's in jeopardy of being absorbed by a customer, Cirrus just needs to stay focused on generating new ideas to help differentiate its customers' products.

"So I don't see anything particularly different or troubling on that front -- it's just part of the business that we're in, and we see good opportunities to grow with our existing customers over time. It's not a straight line up and to the right."

Rhode also said that he'd much rather be working with the market leader than without them, because they're the ones innovating and making the products consumers really want.

"It's certainly an interesting dynamic. It's not how you'd draw it up on paper ... A lot of times we know we're in something new and we don't even know what it is, let alone who's going to buy it, or how many or what not. But I think you handle that by making sure you're aligned with the customers that people are the most compelled by, and do a good job by them."

2. The competition is getting thinner

While the world seems to be getting much more interested in audio and voice technology, interestingly, Rhodes said that from the company's point of view, they're experiencing less competition than ever.

Citing one example, the competition for Cirrus' smart codec products (which consist of an audio codec, plus a digital signal processor and embedded software) is mostly just from Qualcomm, but Rhode noted that Qualcomm's smart codec tends to be bundled with its application processor. The continued large opportunity for Cirrus is customizing and differentiating an audio and voice experience for its customers who don't want the same bundle that everyone else is using.

Rhode also said the beauty of its recent smart codec wins in the Android market is that it's a sticky business, which, once established, should open doors for Cirrus' amplifier and microphone products as well.

3. A huge opportunity in headsets

Rhode said that as recently as last year, of the 1.5 billion headsets sold each year, the vast majority had no reason to contain any of Cirrus' products. Today, however, Rhode is excited about Android devices that are transitioning to a USB-C connector, because it opens up all kinds of new possibilities in headsets.

That's because a USB-C connection can provide power in addition to the audio data. So, regardless of whether Android phones lose the headphone jack like the new iPhones already have, they'll be able to power new premium-sound headsets that can do other things like noise canceling -- without a battery. That little bit of power being provided to the headphones can be used for all sorts of enhancements, which is exactly what Cirrus is now currently talking to its Android customers about.

With a 1.5 billion unit-a-year market suddenly offering the ability to include semiconductor content inside, the company is moving swiftly to take advantage, with its noise-canceling devices now shipping, and Cirrus components already showing up in USB-C headsets. This market is expected to increase rapidly for Cirrus, with Rhode noting:

"I don't think there's any question that they will all migrate over to USB-C from the awful little micro-USB connector that the Android devices use today. Most of our customers we talk to are in some various phase of doing that as fast as possible."

An analyst from Needham & Company recently upped the price target for Cirrus from $70 to $80, saying the Android digital headset business alone could add between $100 million to $300 million in sales over the next one to three years. For a company that did $1.5 billion in sales in its last fiscal year, that would be a very nice boost to growth and help diversify the company's revenue base outside of Apple. Along with the upcoming launch of the iPhone 8, and emerging opportunities in the smart home and voice biometrics markets, Cirrus has plenty of intriguing growth prospects on the horizon.