You might be tempted to believe that companies that operate in the semiconductor industry would have similar businesses, but in this case, that couldn't be further from the truth. On the one hand, you have an industry leader that dominates its core business while becoming a key player in a new and emerging technology. The other has a legacy business that has become a commodity and is consistently holding the company back from profitability as it enters a new and promising market.

Investors that have followed these companies may be tempted to jump to a conclusion about which is a better place for new money, but it is always worth taking a step back to look at the big picture and see which company has better growth prospects going forward. 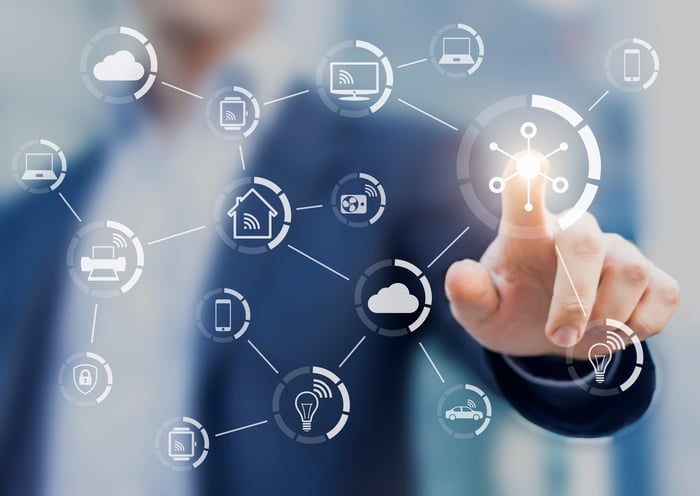 NVIDIA has a clear advantage here as Cypress is currently not profitable and mired in debt. Cypress acquired Spansion in 2015 and acquired Broadcom's  connectivity business last year in its push into the internet of things and connected car markets to offset declines in its memory products division. These acquisitions position the company into growth markets, but NVIDIA has a much stronger balance sheet as a result.

Cypress has enjoyed something of a renaissance lately after seeing share price declines for most of 2015, and then regaining some of that ground in 2016. The company produces semiconductors in two broad categories: microcontroller and connectivity division (MCD), which serves the connected car and IoT markets, and its memory products division (MPD), which has continued to decline and is becoming a less relevant part of the company's business.

Cypress has made an aggressive move into the connected car segment and is targeting additional opportunities in the IoT market. In its most recent quarter, Cypress saw its revenue increase 27% year over year to $531.9 million, while its net loss of ($46 million) was an improvement from the ($104 million) it lost in the prior-year quarter. On an adjusted non-GAAP basis, which excludes stock-based compensation and acquisition expenses, the company produced net income of $46 million, double the $23 million in the prior-year period.

NVIDIA has continued dominance in its core gaming market as its graphics processing units (GPUs) are seen as something of a necessity by gamers using ever more data-hungry systems. The company has continued its push into artificial intelligence (AI), as its GPUs currently have no match for the sheer number-crunching required to train AI systems. The company has an unparalleled number of partnerships with automakers and tier 1 parts suppliers, as it looks to become the industry standard technology for self-driving cars.

While Cypress is looking to break into a new market, its results are being held back by the continuing secular decline in its memory business. NVIDIA's gaming segment continues to grow, while its AI business is booming.

Cypress has seen its stock price increase an impressive 25% over the last year, beating the broader markets increase of 14%. During the same period, NVIDIA has returned a mind-blowing 200%.

Given that Cypress is currently not profitable, none of the normal metrics, such as P/E ratio or PEG ratio, would provide any useful comparison. Using price to sales as a proxy, Cypress has a multiple of 2.28, compared to NVIDIA's more expensive 14.23. 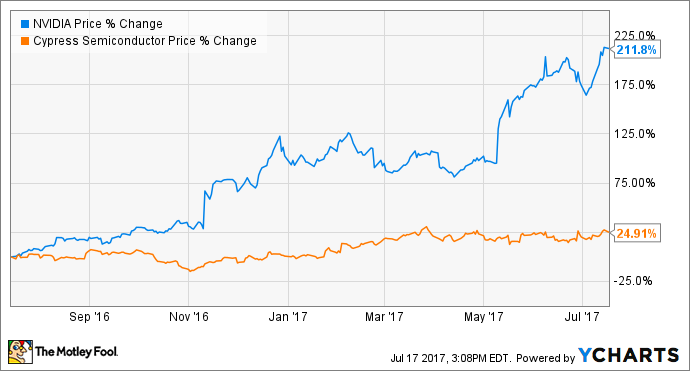 So, while NVIDIA has posted better returns, Cypress has a less expensive stock.

Given the respective situations of these companies, the results are likely not too surprising. NVIDIA's execution lately has been near flawless, while Cypress has been working to reinvent itself. While that transition has been ongoing, it will likely be a while longer before investors know if it has been successful. With NVIDIA, the success has already arrived and will likely continue for the foreseeable future.