Amazon is already leading the smart-speaker market -- and opening up Alexa's audio recordings could help keep it that way.

Amazon.com (AMZN 2.07%) has built one of the most advanced voice assistants on the market with Alexa. The assistant comes baked into Amazon's popular Echo speaker, as well as other devices, and it allows users to ask information about the weather or sports scores, control connected smart-home features, and of course, order products from Amazon's website.

The Echo starts listening when a user says key words like "Amazon, Echo, Alexa, or computer,"and Amazon saves some of the audio recordings in order to teach Alexa to understand commands better. So far, Amazon has kept the voice recordings that the Echo collects very private, but a new article (paywall) from The Information says Amazon may soon allow developers to access these voice recordings, as well. 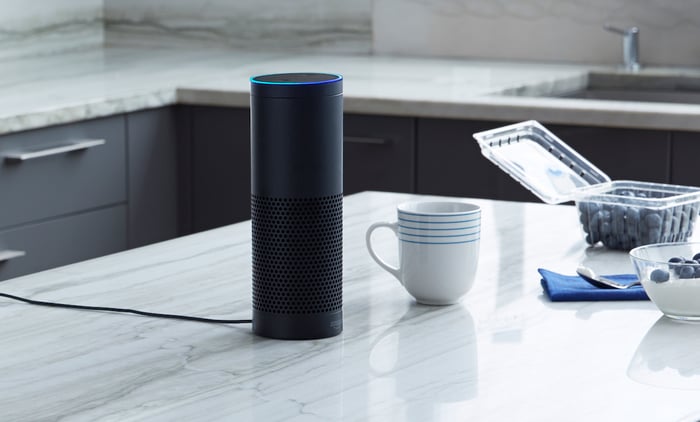 What's encouraging Amazon to make the possible change? In short, competition. Alphabet's (GOOG 2.36%) (GOOGL 2.39%) Google allows developers access to some of the audio recordings that its Google Home speaker collects, and Amazon is nervous that this could give Google's speaker an advantage over its Alexa-powered devices.

Why audio recordings are so important

To be clear, Amazon hasn't made any changes yet and hasn't said that it's going to start giving access to developers. Amazon has a vast network of developers that create "skills" -- or voice-activated programs -- for Alexa. This allows the Echo speaker to understand commands so it can order a pizza from Domino's, or tell you how your latest stocks are doing.

Alexa already has more than 15,000 skills, which puts it miles ahead of Google Home's 378 voice apps. But Google isn't exactly a great company to underestimate.

The company's Google Assistant, which is its own voice assistant baked into Home, can answer an array of internet search-related questions that Alexa can't. And while Amazon already has an estimated 70% of the voice-enabled speaker market this year, Google will take a respectable 23.8%, according to eMarketer. The research firm also expects Amazon's share to fall as Google Home gains more ground, though Amazon is expected to retain the lead for the foreseeable future.

All of this matters to Amazon because the company is betting that the more people who have Alexa devices in their homes, the more they'll make voice-activated purchases from its e-commerce business. If it opens up the voice recordings to developers, Amazon may be able to make better skills for Alexa, which could, in turn, encourage users to use their devices more often.

Consider that owners of Amazon's Echo Dot, a smaller version of the Echo, spent 10% more on Amazon in the six months after they bought a Dot than they did prior to owning one. The frequency of their purchases also increased by 6%, according to data from NPD Group. Additionally, research from RBC Capital Market says that 17% of consumers have used an Echo device to order from Amazon, and that these orders will result in $10 billion in annual sales by 2020.

If all that weren't enough to show the importance of Alexa-powered devices, consider that the smart-speaker market is expected to hit $13 billion by 2024, according to Global Market Insights.

In short, Alexa-powered devices are an increasing revenue stream for Amazon and a way for it to sell more products on its platform. The company may have to open up Alexa recordings to developers to help keep its current momentum going. That, in turn, could make Alexa better at knowing what users are saying, and might even make them more apt to use the device to purchase items.

What's unknown is if users will get creeped-out by the fact that developers might have more access to what they're talking about in their homes, and stop using or buying the Echo. That seems unlikely, though, and any major privacy concerns by a minority of users could be offset by an improved Alexa that others are more than willing to talk to -- and order items from.

Suzanne Frey, an executive at Alphabet, is a member of The Motley Fool's board of directors. Chris Neiger has no position in any stocks mentioned. The Motley Fool owns shares of and recommends Alphabet (A and C shares), and Amazon. The Motley Fool has a disclosure policy.