The retail REIT is down nearly 20% over the past year, but there could be more downside ahead.

Realty Income (O 0.98%), a net-lease real estate investment trust focused on retail real estate, hasn't performed well recently, with its stock price down 19% over the past year. Despite the drop, it's entirely possible that we could see Realty Income fall even further. Here are three things that could make the stock drop, and whether investors should be worried or not.

Retail worries could get worse

Many investors are scared to get involved with the retail sector right now, and who could blame them? There have been a few high-profile retail bankruptcies lately, as well as a bunch of store closure announcements. Many other brick-and-mortar retailers are struggling to hang on. In fact, this is why most retail-focused REITs have underperformed other areas of real estate. 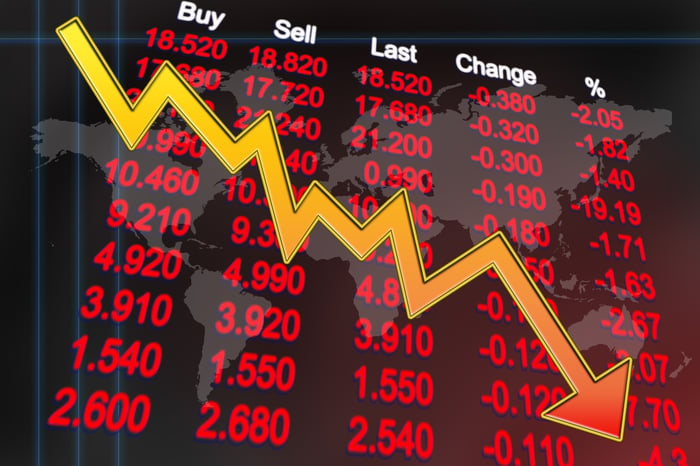 To illustrate this point, look at the performance of Realty Income, Kimco Realty, and Simon Property Group compared with the overall REIT industry over the past year. While the company has performed better than its peers with more exposure to high-end and discretionary retail, it hasn't been immune to the retail headwinds. 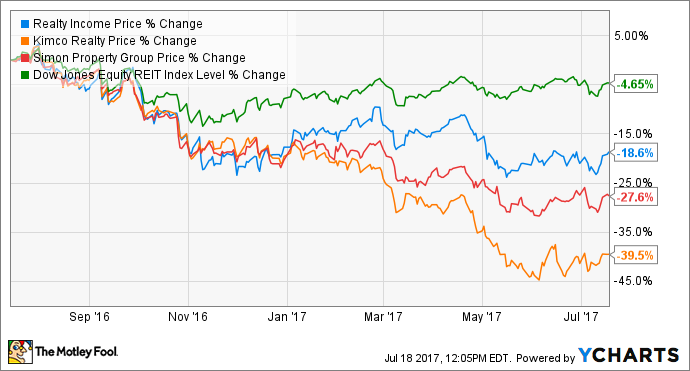 As I've written before, the majority of Realty Income's portfolio isn't in danger. The company specifically focuses on retail properties that don't have to worry about e-commerce competition and can hold up well during recessions. Plus, its long-term net-lease structure keeps tenants locked in for years at a time.

For this reason, I see any retail-related drop as a long-term opportunity in Realty Income. Just be aware that if the brick-and-mortar retail environment gets even worse, we could see Realty Income and other retail REITs drop further.

Since the current rate-increase cycle began in late 2015, the Federal Reserve has implemented four separate 25-basis-point increases in the target federal funds rate, which currently sits at 1.00%-1.25%. 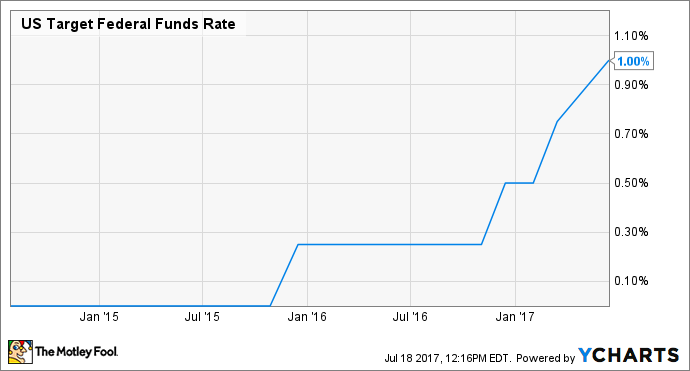 As of the latest projections, the Fed sees the rate rising to 2.1% by the end of 2018 and to almost 3% by the end of 2019. These projections are well known, so it's fair to assume that they're somewhat accounted for in Realty Income's stock price. However, there's a possibility that it will have to increase interest rates more than expected, especially if inflation spikes unexpectedly.

Acquisition opportunities could dry up

Realty Income's primary growth mechanism is acquisitions. And when it comes to acquiring new properties, the company has a history of under-promising and over-delivering, especially in recent years. In fact, the company experienced such an attractive environment for acquisitions in 2016 that it increased its full-year guidance every quarter and ended up acquiring $1.86 billion in properties -- more than twice the volume of properties it originally anticipated.

As of the first quarter, Realty Income is projecting about $1 billion in acquisitions "at attractive investment spreads." If the company can't find enough attractive opportunities to meet its target, it could be a negative catalyst for the stock.

To be clear, there are many reasons Realty Income's stock could fall, but these are three that I believe are rather likely to occur. I doubt we've seen the end of the retail industry's woes, the Federal Reserve could be forced to increase rates faster that it plans to if inflation spikes, and higher rates could lead to a less attractive acquisition environment for the company.

Having said that, all three of these would be temporary issues that long-term investors shouldn't fear. In fact, I'd look at any significant price drop in Realty Income's stock price as a welcome long-term buying opportunity.

My Top Real Estate Stock to Buy and Hold Forever

Why Realty Income Can Keep Increasing Its Dividend