Back in 2014, chip giant Intel (NASDAQ:INTC) reportedly dropped around $100 million on a company called Basis Science.

In a press release announcing the completion of the acquisition, Intel called Basis Science's key product -- the Basis band -- "the world's most advanced health tracker and web and mobile service." 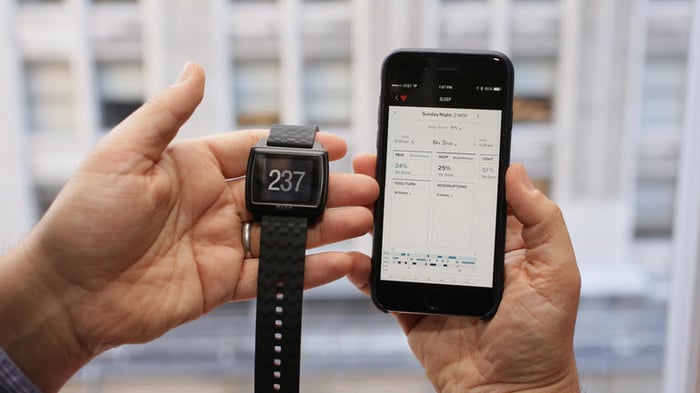 Intel justified this acquisition by saying that it "accelerates Intel's wearable products focus" and claiming that "it also brings access to new technology, and further expands the leadership team with new people who have a track record of innovation in wearables for health and fitness applications."

About three years after this acquisition, CNBC reports that Intel has outright eliminated its wearable devices efforts, laying off "about 80 percent of the Basis group in November."

Why did anybody at Intel think this was a good idea?

It was clear from the get-go that Intel had no business spending money on Basis Science or even chasing the market for wearable devices.

The market just isn't that large and, if we're being totally honest, it looks as though Apple (NASDAQ:AAPL) is dominating this market with the Apple Watch, with other players fighting for the scraps.

Basis Science built mediocre health trackers ("mediocre" is generous -- these devices were found to overheat and Intel ultimately recalled them all) with limited computing power and, if we're being honest, limited mass market appeal.

This means that Intel needs to focus on things like maintaining its dominant position in the personal computer and data center processor markets, investing heavily to make sure it's positioned for the next big trends in computing-intensive areas, and broadening its product portfolio so that it can offer complete platforms -- rather than single components -- into the markets that it serves.

To Intel's credit, it does work on those things, but the problem seems to be that the management team at Intel (at the very least, the individuals who were making the decisions back in the 2013-2015 timeframe) allowed themselves to be distracted from the core business.

The $100 million acquisition of Basis Science, the money wasted working on its Quark line of micro-controllers, and the numerous other "distractions" from the core business have, in my view, helped to weaken the company's competitive positioning in its core markets.

Intel needs to clean up its portfolio

It's good to see Intel disinvesting in failed initiatives like Basis Science and I hope that the company continues to adjust its business portfolio.

I want to see Intel continue to kill off "non-core" efforts so that it can redirect employees and research and development dollars toward shoring up its core businesses.

Intel could certainly benefit from spending more on chip manufacturing technology development (look at the struggles the company is facing in bringing its 10-nanometer technology into production).