The industrial conglomerate delivered an encouraging Q2 report, and affirmed its 2017 guidance. Here's what investors need to know.

Textron (TXT 0.49%) announced solid second-quarter 2017 results on Wednesday, punctuated by strength at Bell Helicopter, modest top-line growth thanks to a recent acquisition, and a reiteration of its full-year financial guidance.

Let's take a closer look, then, at how the industrial conglomerate capped the first half of the year, as well as what investors can expect going forward. 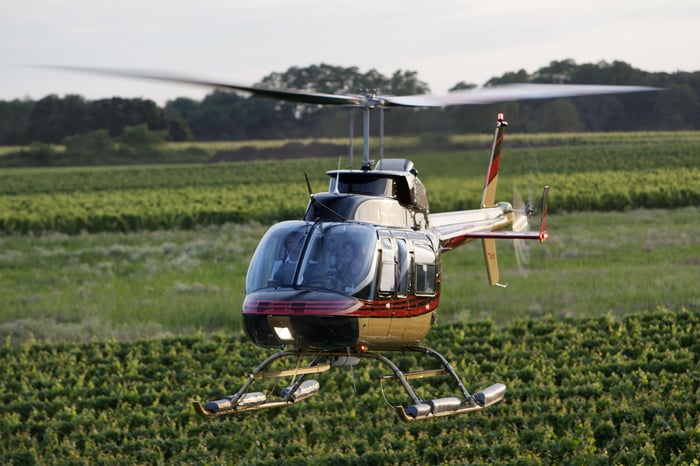 Revenues were up in the quarter, primarily driven by the Arctic Cat acquisition. We saw strong performance at Bell, and were encouraged by the continued strengthening in commercial helicopter demand. We saw strong year-over-year cash performance, principally driven by improvements in working capital. We are continuing to invest in our businesses, while taking the opportunity to buy back shares.

For the full year, Textron continues to expect GAAP earnings per share from continuing operations to fall in the $2.22 to $2.45 range, and adjusted EPS in the range of $2.40 to $2.60. In addition, Textron reiterated its expectation to generate full-year cash from continuing operations of the manufacturing group of $1.045 billion to $1.145 billion, and adjusted manufacturing cash flow (before pension contributions) of $650 million to $750 million.

In the end, apart from its slight bottom-line beat relative to expectations, there were no big surprises in Textron's latest quarter. And the company is rightly pleased to see its integration of Arctic Cat going as planned while commercial helicopter demand continues to recover. So while shares were little changed on the news, long-term investors should be happy with Textron's position right now.