Omnicom Group (NYSE:OMC) announced slightly better-than-expected second-quarter results on Thursday, as the impacts of recent agency dispositions and the foreign exchange headwinds were partially offset by modest organic growth. Shares of the public relations specialist climbed around 2.4% as investors absorbed the news.

Let's have a closer look, then, at how Omnicom finished the first half of the year, as well as what investors can expect looking forward. 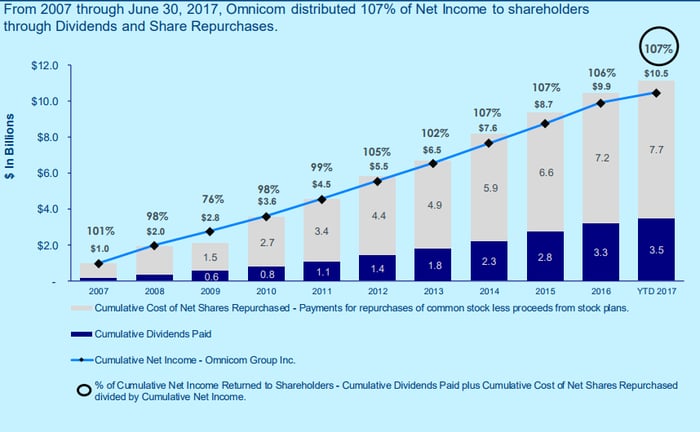 During the subsequent earnings conference call, Omnicom CEO John Wren called it a "solid quarter," noting the company's organic growth was in line with expectations, while it also met its margin targets and remains on track to achieve a 50 basis-point margin improvement for the rest of the year.

Wren also stated that though Omnicom doesn't anticipate additional significant agency dispositions in 2017, net acquisition disposition revenue will continue to be negative in the second half of the year.

"We're pleased that our financial performance continues to reflect the excellence of our people and agencies," Wren insisted. "We've had a strong first half of the year and are well-positioned to deliver on our internal targets for the full-year 2017."

Omnicom doesn't provide specific revenue or earnings guidance. But CFO Philip Angelastro did state the company expects the impact of foreign exchange to be "slightly negative" in the third quarter, and positive 0.0125% in the fourth quarter. Even so, Omnicom continues to expect currencies to have a negative 30- to 40-basis point impact on revenue for the full year.

In the end, there were no significant surprises in Omnicom's second-quarter results. Instead, the company continued to position itself to benefit from the future trends of its industry. So while it may not be the most exciting stock on the market right now, I think investors should be happy with where Omnicom Group stands today.