The streaming giant isn't attracting customers like it used to in its home market.

Netflix (NFLX -1.82%) began an aggressive international expansion in 2011, and it's been a massive, albeit expensive, success so far. The company now has over 52 million international subscribers, surpassing total U.S. subscribers for the first time during the second quarter. International profitability, while still usually negative, is steadily improving.

Another piece of good news: Netflix's cost to acquire an international customer has remained roughly flat over the past four years, as measured by marketing spend divided by net customer additions. While Netflix has nearly quadrupled its international marketing spending since 2013, this has led to a proportional increase in the rate of new customers. That's a sign that Netflix's international business is nowhere near saturation. 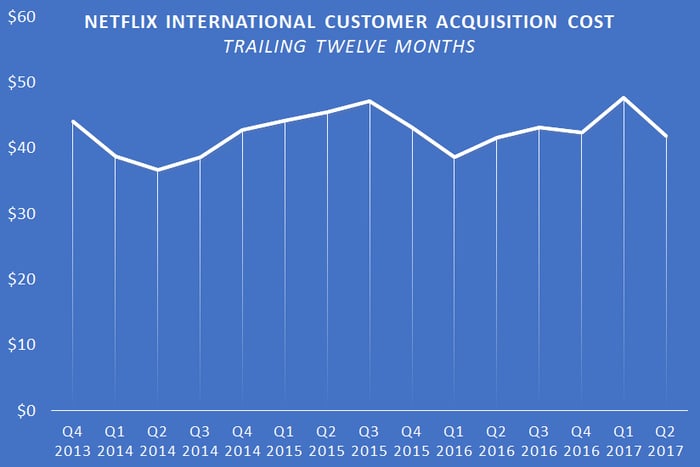 An entirely different story is playing out in the U.S., one that should cause some concern for Netflix investors. In 2013, it cost Netflix around $45 to acquire a customer in the U.S., roughly what it costs to acquire an international customer today. But that number steadily rose throughout 2014 and 2015, followed by an explosive increase over the past year and a half. Over the trailing twelve months, Netflix spent more than twice as much to acquire a U.S. customer as it did four years ago. 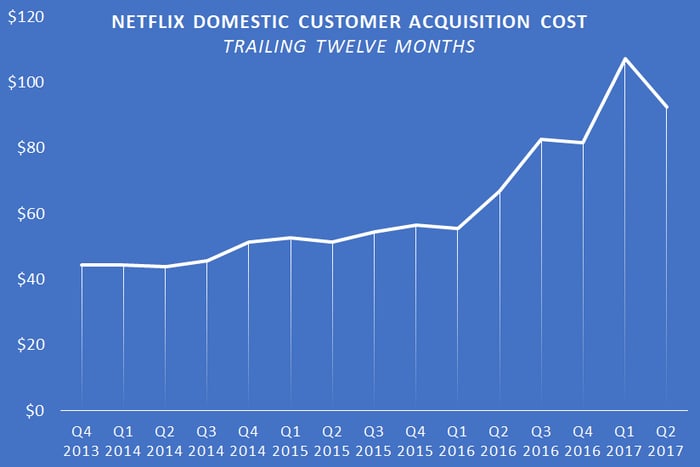 This doubling of domestic customer acquisition cost has a few potential causes. With around 50 million U.S. subscribers, Netflix is much closer to saturation in its home market than it is internationally. The pool of potential new customers in the U.S. is shrinking every year. Eventually, you'd expect Netflix's domestic business to slow way down, regardless of how much it spends on marketing, simply because there's no one left to add that has any interest in the service.

An increase in the domestic churn rate could also be the culprit. Netflix's marketing spending must both replace customers who have dropped the service and acquire additional customers beyond that to produce subscriber growth. If more U.S. subscribers are dropping Netflix compared to four years ago, the customer acquisition cost would naturally rise.

Competition may also be a factor. The number and quality of streaming video options in the U.S. have increased dramatically over the past four years. Amazon has ramped up its content spending, HBO launched HBO Now, and Hulu has spent big on content and scored a recent hit with Handmaid's Tale. Skinny bundles are also in the mix, with services like PlayStation Vue  and DirecTV Now offering dozens of cable channels for far less than the cost of a cable TV subscription.

For Netflix to make money on a customer, that customer needs to stick with the service long enough to pay back the acquisition cost. During the second quarter, each U.S. subscriber produced about $9.66 in revenue for Netflix. With Netflix spending around $90 to acquire each new subscriber, a customer must stick around for a little over 9 months for Netflix to break-even, ignoring all other costs.

But there are other costs, most notably content. The U.S. streaming business had a gross margin of about 45% during the second quarter, with most of Netflix's cost of revenue being content costs. A new subscriber would need to remain for nearly 21 months in order to produce enough gross profit to fully offset the acquisition cost.

The subscribers that Netflix is adding in the U.S. aren't as profitable as they used to be. That's a problem, potentially a major one if marketing costs per new customer continue to rise, or if churn increases. The silver lining is that the international business is running smoothly, with no sign that acquiring customers is becoming more difficult.

The big question is how much profit will Netflix produce once it fully matures. With Netflix being valued at nearly $80 billion, the market is pricing in some hefty future profits. But if Netflix runs into the same customer acquisition problem internationally as it's facing in the U.S., investors may need to adjust their expectations.