Please ensure Javascript is enabled for purposes of website accessibility
Log In Help Join The Motley Fool
Free Article Join Over 1 Million Premium Members And Get More In-Depth Stock Guidance and Research
By Adam Levine-Weinberg - Jul 23, 2017 at 8:35AM

Apple may not be able to ramp up iPhone 8 production until close to the 2017 holiday season -- but investors shouldn't fear a brief delay in the iPhone 8 release schedule.

Shares of Apple (AAPL -0.11%) surged in the first few months of 2017, as sales of the iPhone 7 and iPhone 7 Plus beat expectations and as hype for the next-generation iPhone 8 began to build.

However, Apple stock has had an up-and-down performance since peaking in mid-May. A big reason for investors' recent skittishness is a series of reports indicating that the iPhone 8 will be delayed due to various production problems. 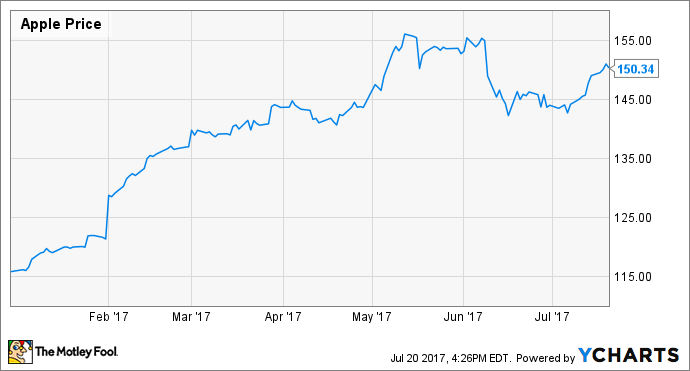 However, investors shouldn't fear these potential iPhone 8 delays. Apple's customer base is fiercely loyal, so while a delay may alter the timing of iPhone sales over the next 12 months, it isn't likely to impact Apple's total sales in the 2018 fiscal year. Furthermore, in the short run, Apple can partially offset any iPhone 8 delays by selling other models.

The iPhone 8 is behind schedule

In honor of the iPhone's 10th anniversary, Apple is making some ambitious design changes for the upcoming iPhone 8. Some of the widely rumored changes include a new form factor with an all-glass design, an OLED display with thin bezels and a "virtual" home button, 3D scanning technology for facial recognition, wireless charging, and a fingerprint sensor integrated into the power button.

Apple often hits a few snafus when ramping up production of a new iPhone model. Given the extent of the design changes being made this year, it's not surprising that the delays may be greater than usual.

The biggest hold up relates to the OLED display, which is replacing the LCD panels Apple has traditionally used. The OLED display should be brighter and more power-efficient than an LCD screen while enabling a wider viewing angle and a thinner bezel. However, it is still a relatively immature technology, and Samsung will have to dramatically increase its OLED panel production to meet Apple's requirements. Additionally, Apple is having trouble integrating its Touch ID and 3D scanning features with the new screen. The net result is that production of the iPhone 8 may not fully ramp up until November or December.

There will be iPhones for sale this fall

Even if supply is tight, Apple could still launch the iPhone 8 in October (and possibly even September), albeit with a massive order backlog. Furthermore, based on Apple's long history of successful supply chain management, investors shouldn't discount the likelihood that iPhone 8 production will ramp up faster than recent reports have suggested.

Moreover, it's important to remember that Apple is expected to launch three new iPhone models this fall, not just one. In addition to the OLED-based iPhone 8, Apple will probably upgrade the iPhone 7 and iPhone 7 Plus while maintaining the same 4.7" and 5.5" form factors. (Those phones may be called the iPhone 7s and iPhone 7s Plus.)

These models should be relatively easy to produce. With the iPhone 8 price rumored at $1,000 or more, plenty of consumers will opt for the somewhat cheaper iPhone 7s and iPhone 7s Plus models. While there have been rumors about production delays for these models as well, it should be much easier to ramp up output, based on the relatively modest design changes that are likely to be present.

The iPhone 7s and iPhone 7s Plus can be placeholders

Despite its high expected price tag, the iPhone 8 looks like it will be a huge success. But if supply is really as tight as it seems, Apple won't come close to meeting initial demand during the holiday quarter.

During that period (Q1 of fiscal 2018), Apple may have to rely on the iPhone 7s and iPhone 7s Plus -- as well as older models -- to drive the vast majority of its sales. This means that a big jump in sales isn't likely, but iPhone sales shouldn't plummet either.

Apple would then be poised to post huge sales gains in the second and third quarters, by which point it will have had plenty of time to iron out its early production snafus. It will also face easier year-over-year comparisons then. Fiscal 2018 may not play out like a typical year for Apple -- but in the end, it is almost certain to be the iPhone maker's best year ever.