Please ensure Javascript is enabled for purposes of website accessibility
Log In Help Join The Motley Fool
Free Article Join Over 1 Million Premium Members And Get More In-Depth Stock Guidance and Research
By Matthew DiLallo - Jul 24, 2017 at 11:48AM

The pipeline company unveiled more details on several big plans for the future on its second-quarter conference call.

Kinder Morgan (KMI 2.48%) recently put the wraps on another solid quarter. However, overshadowing its financial results was the unveiling of the company's plans to return more cash to shareholders starting next year. Its management team provided more details on that policy change, as well as some other valuable nuggets, during the accompanying conference call. Here are four things they wanted investors to know about that plan and what else to expect in the future.

No. 1: Our hard work is finally paying off

Founder and Executive Chairman Richard Kinder led off the call by saying:

At the end of 2015 we made a very difficult decision to reduce our dividend for the first and only time in KMI's history. We said we would work hard to strengthen our balance sheet and fund our growth CapEx from our internally generated cash flow without having to issue equity or additional debt. And that when we had made sufficient progress on those goals, we would begin to return additional value to our shareholders through some combination of dividend increases and/or stock repurchases.

Kinder would go on to note that the company's efforts resulted in the completion of a string of strategic initiatives that have reduced debt by $5.8 billion. These included selling a 50% stake in its Southern Natural Gas system to Southern Company (NYSE: SO), partnering two projects with private equity, and completing the IPO of a 30% stake in Kinder Morgan Canada Limited (KML). As a result of completing those initiatives, the company is now in the position where it can start giving back more money to investors next year, including a 60% dividend increase in 2018, a plan for 25% annual increases in 2019 and 2020, and the authorization to repurchase $2 billion of shares. 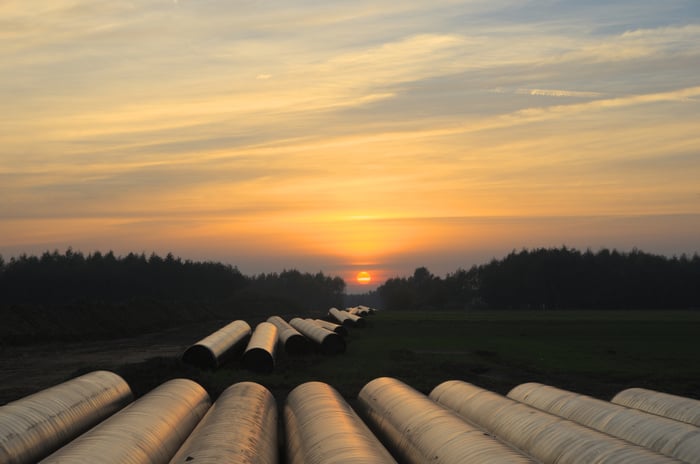 No 2: We'll be the most conservative pipeline company in the sector

That said, even with that big boost in shareholder distributions, one thing Kinder wanted investors to know is that his company doesn't plan to go back to the way things were. Before slashing its dividend in 2015, the company paid out nearly all its cash flow to investors and relied on issuing equity and debt in the capital markets to finance growth. However, Kinder stated that going forward:

We intend to take these steps [of increasing shareholder distributions] while continuing to strengthen our balance sheet by funding all our growth capital needs at KMI out of operating cash flow without the need to issue equity or incur additional debt. We expect to maintain best in class coverage for our dividend, for example about 2.5 times coverage in '18 and two times or better in '19 and '20.

Those dividend coverage ratios are much higher than what rivals expect. For example, Canadian energy infrastructure giant TransCanada (TRP 2.32%) only expects a 1.8 times coverage next year, which would rise to 2.0 by 2020 while Enbridge (ENB 0.91%) expects its coverage to be 50% to 60% of available cash flow from operations. Meanwhile, many U.S. pipeline companies are comfortable with coverage ratios of 1.2 times or lower.

No. 3: Our backlog is growing, with more on the way

Despite the boost in shareholder returns, Kinder Morgan still has plenty of growth ahead of it even though it will be fully funding that growth with internally generated cash flow. CEO Steve Kean pointed this out on the call by saying that "the backlog currently stands at $12.2 billion. That's an increase from last quarter." Furthermore, he noted that the company is "seeing additional opportunities on the horizon across multiple fronts, whether it's producer push projects out of the Permian, additional power plant connections, export needs to Mexico and LNG as well storage opportunities." In fact, it is currently developing a more than $1 billion natural gas pipeline project in the Permian as well as looking at a large expansion opportunity on its EPNG system. 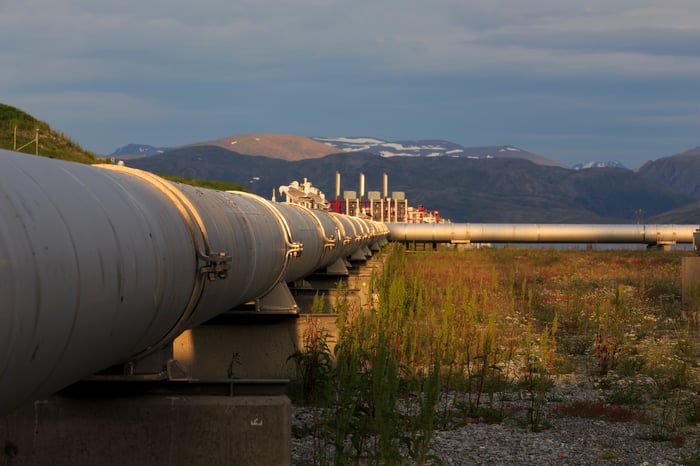 One of the highlights of the quarter was the successful completion of the Kinder Morgan Canada Limited IPO, which provided the company with the vehicle to finance the Trans Mountain Pipeline expansion project in the country. That said, financing that project was only part of the rationale behind the creation of that new entity. The other, according to the Kinder Morgan Canada CFO Dax Sanders, is that he sees the shares as a "good currency" for potential merger and acquisition opportunities in the country. Sanders said on the call that "we think there are some good opportunities out there and we like a lot of the assets that we see in Western Canada. So I think it is a good currency." In other words, don't be surprised to see the company start making deals in Canada using Kinder Morgan Canada's stock.

It all adds up to one thing

Kinder Morgan's combination of increasing shareholder returns and improving growth profile highlights its transformation into a low-risk, high-growth income stock. In fact, its current dividend growth projections trump those of rivals Enbridge and TransCanada, which see low double-digit dividend growth over the next few years. Given its faster growth pace, Kinder Morgan's stock could outperform the sector in the coming years.