Please ensure Javascript is enabled for purposes of website accessibility
Log In Help Join The Motley Fool
Free Article Join Over 1 Million Premium Members And Get More In-Depth Stock Guidance and Research
By Matthew DiLallo - Jul 24, 2017 at 9:36AM

No matter how you slice it, the gold and copper miner trades at a ridiculously cheap value these days.

While the rest of the market seems to be hitting a new all-time high every day, shares of Freeport-McMoRan (FCX 0.86%) haven't done a thing this year. In fact, the stock is down about 1% versus a double-digit gain for the S&P 500. That underperformance has come even as the prices of both copper and gold are higher on the year. It's a scenario that has Freeport-McMoRan offering value at a time when cheap stocks are getting harder to find.

On the surface, it would seem Freeport-McMoRan trades at a nosebleed valuation, since its current price-to-earnings ratio is 57 while the market "only" trades at trades at 26 times earnings, which is well above its average mid-teens multiple.

However, a P/E ratio isn't the best way to value a company that produces commodities, because write-offs and other one-time charges can significantly affect reported earnings. For example, last year the company reported a loss of $4.1 billion, or $3.16 per share, despite generating $3.7 billion of operating cash flow. 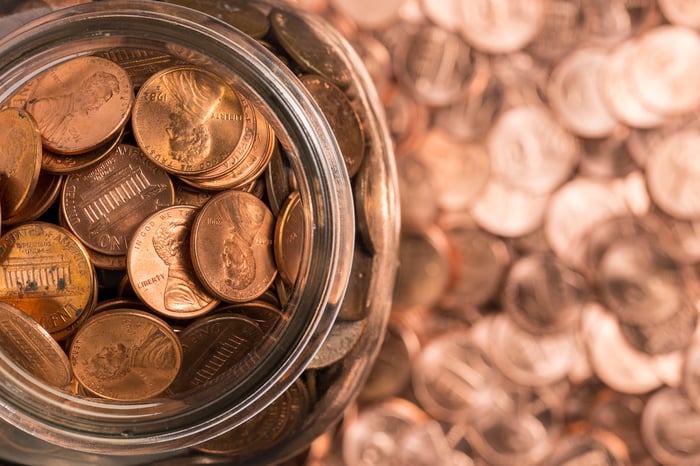 That's why I prefer to use cash-flow multiples when valuing energy and material stocks: They strip away the accounting noise. One metric I like is price-to-cash flow from operations per share, which measures a company's market capitalization to its cash flow, making it a suitable replacement for the P/E ratio. 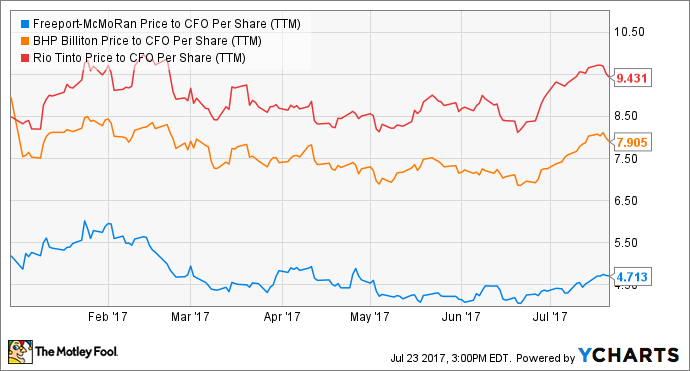 FCX Price to CFO Per Share (TTM) data by YCharts

As that chart shows, the company trades at a ridiculously cheap valuation compared with those rivals when using this metric. Further, it's well below the low-teens cash flow multiple of the broader market.

Still, I always like to check more than one metric so I can get a complete view of a company's valuation. Another important valuation metric to me is EV (enterprise value)-to-EBITDA (earnings before interest, taxes, depreciation, and amortization), because it factors in not only a company's underlying cash flow but also its debt, by measuring its enterprise value instead of just market capitalization.

Here's how Freeport-McMoRan stacks against BHP Billiton and Rio Tinto on that metric, both over the past 12 months and against the forward projection: 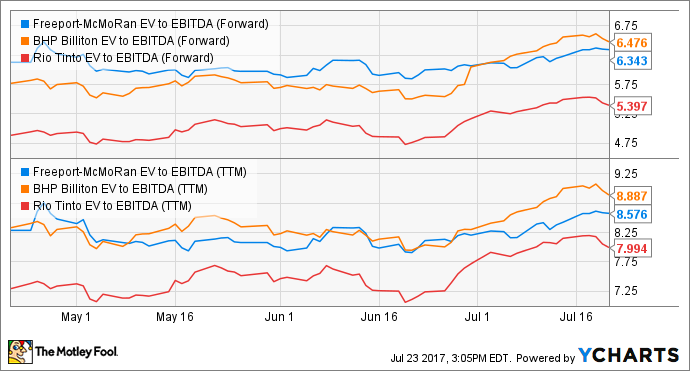 Freeport-McMoRan isn't as cheap as Rio Tinto is with this metric. However, it's still dirt cheap relative to the broader market, which trades at a mid-teens EV-to-EBITDA.

Why is the stock so cheap?

That said, there is a reason why Freeport-McMoRan's stock, as well as those of its commodity producing rivals, are cheap these days. In general, mining companies tend to sell for lower valuations than other stocks because commodity price volatility can be unpredictable. That causes investors to pay less for their stocks than for businesses that generate a more predictable earnings stream.

Meanwhile, Freeport-McMoRan has some company-specific issues that are weighing on its stock. For example, the company still has a mountain of debt on its balance sheet as a result of an ill-fated decision to buy two oil and gas businesses in 2012. While it has whittled its net debt down from $20 billion to $11.8 billion over the past year, it currently expects its leverage ratio to average about 1.5 times this year, which is quite a bit higher the Rio Tinto's industry-leading leverage ratio of 0.7 times.

Another issue that has weighed on Freeport-McMoRan this year are several disputes at its crown jewel Grasberg Mine in Indonesia. Back in January, the company had to suspend copper exports due to a contract dispute with the government. Those exports resumed in April after the government agreed to allow the company to continue shipping for six months while it negotiated a new operating license with Freeport. That said, in May more than 5,000 workers at the mine went on strike to dispute layoffs and employment terms. Given the importance of this mine to the company's cash flow, the uncertainty surrounding its future will continue to weigh on the stock's valuation.

Not low-risk value, but potentially more upside than the market

With mid-single-digit valuation multiples, Freeport-McMoRan offers investors value in today's frothy market. While there are several good reasons why the stock is trading so inexpensively these days, those very issues could prove to be the catalysts that catapult the stock higher, especially in a sideways market. For example, a further improvement in commodity prices alone could drive the stock price skyward because it would not only boost Freeport's cash flow but help shore up the company's balance sheet. Meanwhile, a positive outcome in Indonesia could remove a huge weight from the stock. Add it up, and Freeport's cheap stock offers investors compelling upside potential in a market where that seems to be somewhat limited.