The stock has been a poor performer year-to-date, with the shares down 4.25% in that period as chip stocks have broadly rallied over that time (the iShares PHLX Semiconductor ETF (NASDAQ:SOXX) is up about 22% year-to-date). 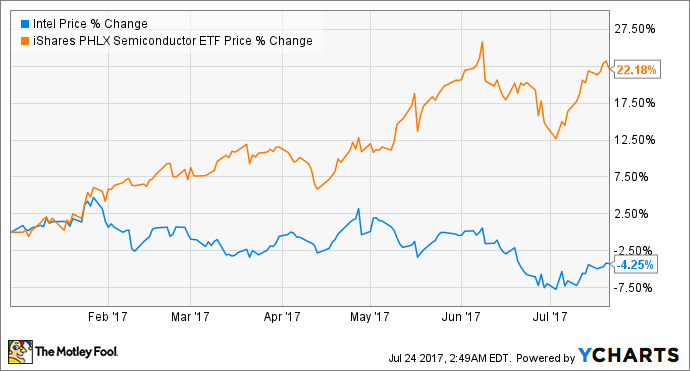 Let's go over the key expectations for Intel ahead of the quarter.

What Intel said it would deliver

Last quarter, Intel guided to revenue of $14.4 billion for the quarter, gross profit margin percentage of 62%, and operating income of $3.6 billion.

On a non-GAAP basis (I'm using non-GAAP since this is what the analyst community tends to use), Intel expects earnings-per-share of $0.68 for the quarter.

I don't expect Intel to deviate too much from that guidance; if the company dramatically missed or exceeded these numbers, it would likely have pre-announced its results for the quarter a while back.

The financial analyst community seems to be expecting Intel to deliver on what it guided without too much surprise; the average analyst revenue estimate for the quarter is $14.41 billion, with the average earnings per share estimate at $0.68 -- pretty much Intel's guidance.

What analysts expect Intel to deliver

I don't think the results for the current quarter will drive the stock price much either way; the company's financial outlook for the third quarter, on the other hand, could be the key to any move in the stock price.

It's worth noting that these figures both represent year-over-year declines from $15.78 billion and $0.80 per share, respectively (2.92% and 7.5% if you want those declines in percentage terms). The main driver of the year-over-year declines is likely the fact that Intel Security will be excluded from the financials in the third quarter of this year, but they were present in the same quarter a year ago.

Other things to listen to

Though in the near-term, I suspect that any big move in the stock price (if there is one) will be driven by whether Intel's fourth quarter guidance misses, meets, or beats expectations, there are several longer-term questions that I'm hoping that Intel will answer on the call (either in the prepared remarks or during the question and answer session).

First, an update from Intel on how it views the competitive landscape across its core businesses (particularly personal computers and data center) and any indications of share shifts from its major customers would be helpful.

Next, an update on the company's progress in bringing its next-generation 10-nanometer chip manufacturing technology into production and its planned release schedule for the first (and potentially even its second) generation parts built using the technology could be interesting.

And, finally, any updates from the company about the following topics may go a long way to improving the narrative around the stock:

I'm expecting this earnings report and accompanying conference call to, at the very least, be interesting and will be tuning into it.