Monday was the sort of day for the stock market that you often see during earnings season. Sectors moved different directions, with the tech-heavy Nasdaq Composite gaining nearly half a percentage point but the more diversified Dow Jones Industrials falling ever so slightly. The rising euro played a role in dividing the market, making things better for U.S. exporters but increasing costs for those companies that import more of their goods from Europe. A wide variety of companies also reported earnings today, creating crosscurrents that largely canceled each other out on the major benchmarks. ManpowerGroup (NYSE:MAN), U.S. Silica Holdings (NYSE:SLCA), and Hibbett Sports (NASDAQ:HIBB) were among the worst performers on the day. Below, we'll look more closely at these stocks to tell you why they did so poorly.

Shares of ManpowerGroup lost 9% after the company performed slightly worse than investors had expected in its second-quarter financial report. The provider of global workforce solutions said that revenue grew 3% from the year-ago quarter, and earnings per share gained a healthier 8% despite the downward impact of restructuring charges on its bottom line. Yet the $1.72-per-share bottom-line figure was $0.01 less than investors had wanted to see, and that was apparently enough to spark a sell-off. Nevertheless, CEO Jonas Prising pointed to better economic prospects throughout many of its regions, saying, "The labor markets continue to improve in Europe and across the globe, which is a good foundation for continued profitable growth." The CEO called out France, Italy, Mexico, and Poland as being particularly favorable. Upbeat guidance for the current quarter should have supported positive investor sentiment, but perhaps because shares aren't quite the bargain they were last fall before the stock's 50% rise, ManpowerGroup was vulnerable to a pullback. 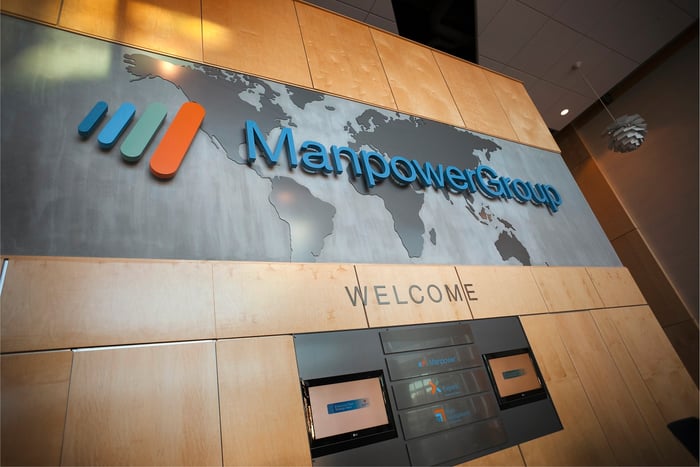 U.S. Silica Holdings stock was down 12%, continuing its decline from late last week. The hydraulic fracturing sand provider's stock had already dropped more than 12% in two days coming into Monday's session, with investors growing nervous about poor supply and demand conditions in the company's core market. Weak oil prices have many concerned about future expansion of fracked wells, but U.S. Silica has already said that it intends to open new mines for fracking sand in Texas in order to supply anticipated expansion in the Permian Basin. Oil prices rebounded more than 1% today, but overall, the trend in crude has pointed downward, and that could spell long-term trouble for U.S. Silica if its customers pull back on their recent expansion efforts.

Finally, shares of Hibbett Sports plummeted 33.5%. The sporting goods retailer issued a profit warning about its second-quarter results, noting that "very challenging sales trends" will cause comparable-store sales to fall by about 10% for the quarter. Because of the weaker sales, the bottom line will take a huge hit, with losses anticipated to fall between $0.19 and $0.22 per share. The news came as a complete shock to shareholders, who on average had expected a profit of $0.15 per share from the sporting goods specialist. As bad as Hibbett's past performance has been, today's announcement really brought home the struggles that the retail niche is going through right now. With some of its peers already having thrown in the towel, Hibbett will have investors more nervous than ever about whether it can survive an incredibly tough period for the industry.