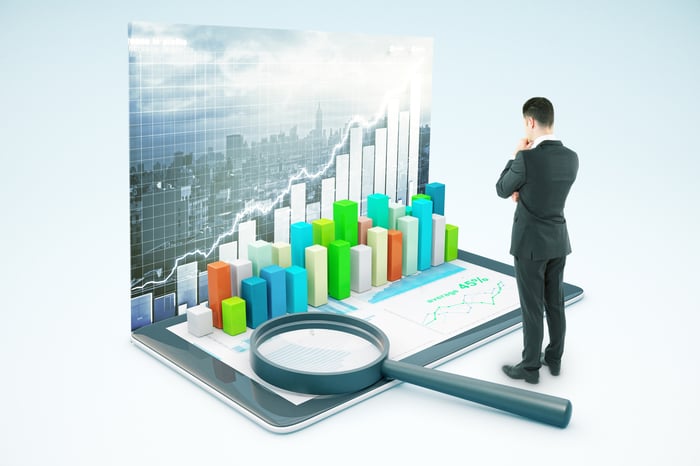 While looking for a bargain dividend stock, many investors simply screen for those with the highest yield or the one that's fallen the most in the past month. But I take a different approach: How much of a yield will I likely be getting for my purchase 10 years from now?

That type of thinking has led to a couple of outstanding picks over the years. For instance, I bought shares of Aflac in Feb. 2009 for $17.50. Seven years later, I now get $1.64 in dividends for every share I own. In other words, I now have a 9.4% yield. And it goes up every quarter.

Viewed through this lens, these are three dividend stocks that I think are bargains right now -- based on what they'll likely be paying 10 years from now.

One of the best-known brands in the world

Here's a little-known fact for you: Harley-Davidson (NYSE:HOG) has one of -- if not "the" -- most tattooed company logo in the United States. It also happens to have a dividend that could offer a huge payoff for long-term investors.

When it comes to dividends, free cash flow (FCF) is the most important metric to watch. This represents the amount of money a company brings in from its normal business in a year, minus any capital expenditures. At the end of the day, it is from FCF that dividends are paid. Here's how FCF and dividend payments have trended since 2013 at Harley.

Over this time frame, the company has never used more than 38% of its FCF to pay out its dividend. That's a good thing, because it means that the dividend is safe if business slows down, and has room for significant growth if it doesn't.

However, it's worth noting that overall FCF has shrunk over 25% since topping out in 2014. That's one of the dangers involved with investing in motor vehicles. This is a highly cyclical industry, and spurts of heavy buying can be offset by long spurts of consumers holding off on buying a new Hog. The company had to cut its dividend significantly during the Great Recession -- so it's worth remembering that this isn't immune to troubles.

That being said, Harley has paid a dividend since 1993, and it has raised it for five consecutive years. Today, the dividend is yielding a modest 2.5%. But over the past year, that payout bumped up 13%. If it continued that pace for 10 years, it's yield at today's prices would be 8.4%. Even if it were a more modest 9% rate of growth, the yield would be a 5.8% yield.

Getting the world working

ManPower Group (NYSE:MAN) is an international staffing and consulting firm that's been in business since the 1950s. However, it wasn't until 1994 that the company began offering a dividend payout. The company was forced to stop growing its dividend during the Great Recession, but has been bumping it up every year since. And it appears to be very sustainable.

As you can see, Manpower's FCF can be lumpy. Even so, since 2013, it has never used more than 36% of its FCF to make its dividend payments. That's very healthy.

Obviously, the company's fortunes are closely tied to the global economy. When it is expanding, companies are hiring, and they are calling upon Manpower to help solve their HR issues. But when the economy slows or contracts, Manpower can be one of the first to suffer.

Fortunately, that hasn't meant a dividend cut for shareholders in the past -- just a pause on the growth button. While the stock yields 2.2% today, if it grew its payout by 9% per year (it grew it 29% last year, but that would be unsustainable), it would have a 5.2% yield.

So long as homes need work, this company will be in business

Finally, we have what I consider to be one of the most promising dividend growth stocks available: Home Depot (NYSE:HD). Though it only offers a 2.2% yield today, I think there are many reasons to believe that long-term shareholders will be reaping the rewards for years to come.

Here's a quick look at the company's history:

From this, two things stand out: (1) FCF has been consistently growing, and (2) only 31% of that FCF is being used on the dividend.

While Home Depot certainly has room to grow domestically, its days of heady store count growth have long passed. That means that capital expenditures shouldn't be anywhere near where they've been in the past. This leads to much more of the cash floating all the way down to the company's FCF.

Given the company's dominant market position -- 24% market share domestically -- and the fact that people will always be looking to make home improvements, I believe this is a very solid pick. The company has paid a dividend since 1987, with increases every year since the Great Recession. Last year, the yield jumped 19%. If it continued at this pace for a decade, you'd have a 12.3% yield. But even at a slower 12% average growth, you'd still get a 6.7% yield.

Obviously, forecasting the future can be very difficult, but given the information we have today, I think all three of these stocks could pay off far more than they appear in the coming decade.