It has been difficult to avoid hearing about the latest Uber scandal this year. Since the calendar flipped to 2017, the polarizing company was smacked by a series of scandals that dealt with anything from sexual harassment and discrimination to questionable business practices. Then, under heavy pressure from major investors, Travis Kalanick stepped down as chief executive of Uber.

Meanwhile, Uber's chief ride-hailing rival Lyft has managed to avoid scrutiny and is preparing to push forward with a big project.

For those unable to keep up with the overwhelming and constantly evolving autonomous vehicle information, Level 5 is a reference to the development stage of autonomy where humans are no longer necessary to drive the car -- the driverless car endgame. "Level 5" will also be the name of Lyft's soon-to-be 50,000 sq. ft. self-driving vehicle development facility based in Palo Alto, California, with as many as several hundred employees by the end of 2018, according to Bloomberg. 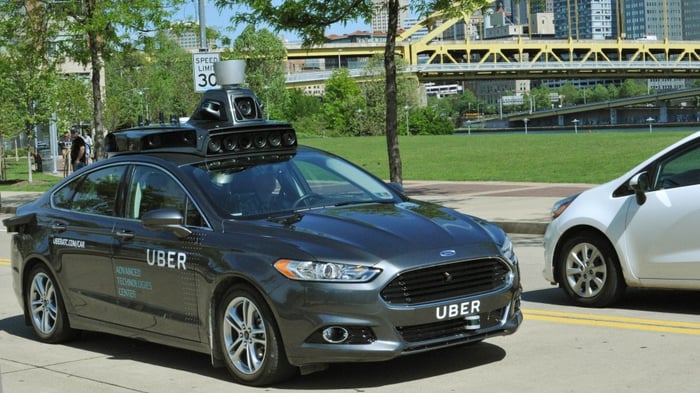 The interesting thing about this move is it goes counter to Lyft's prior strategy to develop autonomous vehicle technology through its partnerships. Lyft is already working on such technology with General Motors (NYSE:GM), Alphabet Inc.'s (NASDAQ: GOOG) (NASDAQ: GOOGL) Waymo, and Jaguar Land Rover. There's still a lot to like about the partner-centric approach, namely far lower costs to develop this technology.

Can it catch Uber?

If Lyft is willing to begin this massive project of developing its own facilities, teams, and technology, then it has to believe it can catch its competition. That will prove a tough task because despite being under scrutiny this year, Uber has quite the head start. Early in 2015, Uber announced its Advanced Technologies Group in Pittsburgh, and in 2016 bought Otto, which was a group focused on self-driving truck technology formed from former Alphabet engineers -- which is a story in its own.

The truth is, Lyft might not be able to catch its competition, but it absolutely has to try, and more importantly it has to develop some level of autonomous technology. That's simply because the companies that could pull ahead in driverless technology development, such as Alphabet's Waymo, would have immense power and leverage over software companies like Uber and Lyft. Do you think Lyft can develop sensors, mapping, and other driverless hardware and technology faster than Alphabet could develop a ride-hailing app? Lyft doesn't think so either, so at least having started its Level 5 development facility is a step towards protecting itself in the future.

Another aspect to consider for both Lyft and Uber is that the major cost in their business model is drivers. Even if the two ride-hailing competitors can't be the first to develop autonomous vehicle technology -- which would still be damaging -- the technology could still eventually solve one of their major costs further down the road. Nobody can guess how this will end, but we know that Lyft is staying out of the spotlight and taking necessary steps pushing forward. Stay tuned -- this will be an exciting race.