All of the economic elements that home builders want are in place right now: The economy is chugging along; unemployment rates are low; and interest rates are low (but creeping up). These three things are leading to robust demand in the housing market, and PulteGroup's (NYSE:PHM) most recent earnings were a reflection of that. Here's a brief rundown of the company's second-quarter results and what investors can expect in the near future. 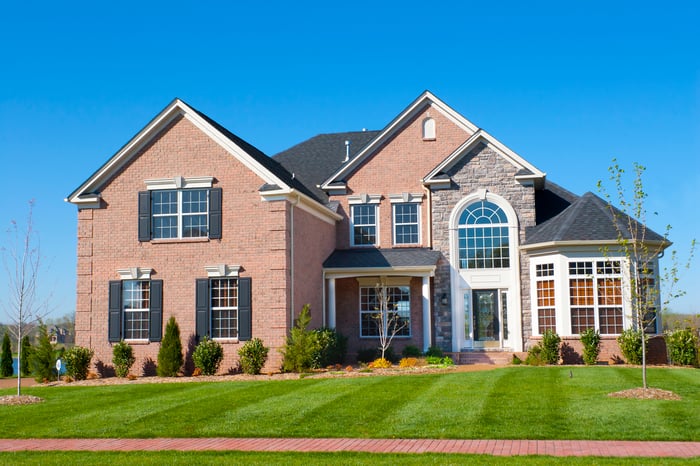 Looking at every line item, Pulte showed positive trends. Its 12% uptick in revenue was a result of new deliveries increasing 6% to 5,044 and the average home price rising 6% to $390,000.

The only reason that those higher revenue numbers didn't translate to an improved net income result is that the company realized a $121 million charge related to the writedown and sale of some land assets. Without this charge, adjusted net income would have come in at $148 million, or $0.47 per share.

On top of the improving revenue numbers, the company also reported new order and backlog results that suggest things will only get better from here. Net new orders in the quarter grew 12% to 6,395 homes, which increased total backlog to 10,674 homes with an average home price of $418,000 in the backlog. The largest new order growth came in its West (19.2%), Southeast (17.4%), and Texas (14.7%) markets. That's encouraging because these three markets represent 58% of the company's backlog.

If there was something worth critiquing with these results it's that Pulte's selling, general & administration expenses remain high at 11% of revenue. To be fair, that is below management's target range of 12% to 12.5% of revenue, but it remains one of the highest SG&A costs as a percent of revenue in the homebuilding business.

Overall, though, the market is looking much better for Pulte, and that's why management decided to deploy $300 million in cash to buy back shares. That should put the company in line to meet its stated goal of $1.5 billion in share repurchases between Q3 of 2016 and Q4 of 2017. With shares of Pulte still trading at 13 times earnings, it looks like a very good time to be buying back shares.

According to CEO Ryan Marshall, the housing market still has room to run and should give Pulte plenty of investment opportunities.

U.S. housing demand continues to benefit from positive market dynamics including an improving economy and job market, high consumer confidence, low-interest rates and a generally limited supply of homes across the country. Given these strong market supports, we believe housing demand can continue to move higher over the coming quarters. Within this market environment, PulteGroup is successfully executing against its business strategies as we focus on intelligently growing our business while delivering high returns.

There's no doubt that the housing market is cyclical, but Pulte's results suggest that the housing recovery is in full swing. Sure, margins were tampered by those one-time charges, but that shouldn't be an ongoing problem for the company. If the company can deliver on that massive stock buyback program without compromising its investment plans, then Pulte should be a stock worth watching.