The summer earnings season is upon us, and on Thursday Expedia (NASDAQ:EXPE) will post its latest quarterly figures. Here are a few key line items investors should keep an eye on when the monster online travel agency (OTA) unveils those Q2 results.

On average, analysts are expecting a per-share net profit of $0.93 for Expedia, on revenue of $2.54 billion. If the company matches those numbers, they would represent encouraging year-over-year improvements on both the top and bottom lines -- in Q2 2016, the company booked just under $2.2 billion in revenue and EPS of $0.83.

Expedia's revenue derives from a key metric that every investor in the OTA space should always keep a sharp eye on -- gross bookings. This line item is the total value of all the company's customer bookings during the year. It has been growing nicely for Expedia. 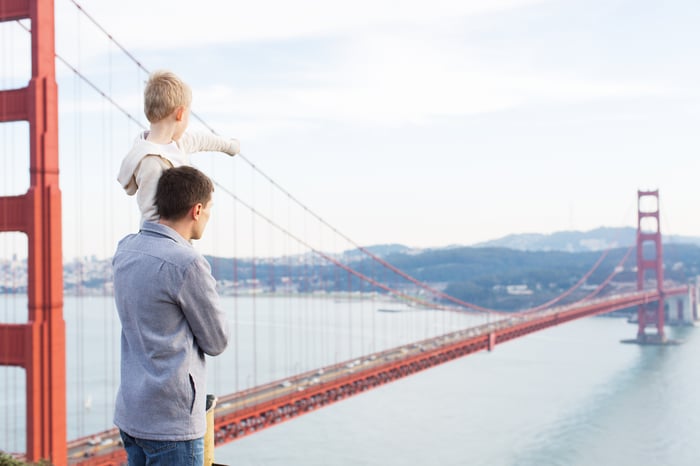 Gross bookings not only give us a fine top-down view of how Expedia's overall business is performing. In Q2 and beyond -- assuming Expedia doesn't make another large-scale asset buy -- they'll also indicate the kind of organic growth those subsidiaries are capable of, now that they've been consolidated into results for over a year.

Speaking of those businesses, investors should also track how they're doing on their own. It helps that Expedia is still breaking down some of their results on an individual basis. In the company's Q1 HomeAway, for example, grew its gross bookings by nearly 50% on a year-over-year basis, to $2.7 billion, while business travel unit Egencia's tally increased 9% to $1.8 billion.

Neither is a substantial part of Expedia's overall operations -- not yet, anyway. They're little sparks of growth, however; without them, overall gross bookings growth for the quarter would have come in at 11%. With them, the figure was 14% (to $23.6 billion overall).

Some costs to think about

Finally, I'd recommend that those interested in Expedia take note of selling and marketing costs. Expedia is locked in a constant struggle with the larger Priceline Group, and below the Expedia/Priceline duopoly a variety of smaller fish are constantly nipping at the two whales. On top of that, Expedia needs to maintain or build awareness of those recently integrated brands.

Selling and marketing are big cost items. In Q1, the company spent nearly $1.3 billion making its services known to the public. That was a hefty 22% higher than in the same quarter the previous year and amounted to almost 60% of revenue.

Expedia has indicated that much of that increase was due to newer assets HomeAway and Trivago, in which it still retains a majority stake, in addition to its core Expedia brand and its Hotels.com unit.

CEO Dara Khosrowshahi has said that the company plans to flog HomeAway harder, increasing its marketing budget by 50% in the second half of this year. But then again, he spoke in general of having "an eye toward improved marketing efficiencies and a bias toward the bottom line." In other words, Expedia might rein in marketing spend to lift profitability. Either way, developments in this area bear watching.

Over the past four quarters, Expedia has had more earnings misses than beats. But I'd be optimistic for Q2, as that aggressive marketing probably helped continue to lift revenue (and hence profit), plus the wider travel industry is still on a growth path. I feel this has a chance of being a positive earnings report from the company.