Despite missing on the bottom line, shares of Supervalue are trending higher after the top-line reassured some investors the recent Amazon doom and gloom could be overblown.

Shares of SUPERVALU Inc. (SVU), a grocery leader serving customers through a network of more than 2,000 owned, franchised and independently owned stores across the country, are receiving some welcome optimism from the markets after releasing its first-quarter fiscal 2018 results and are trading 14% higher as of 3:20 PM EDT.

Starting from the top, Supervalu reported consolidated net sales of $4 billion which equated to a 6.3% gain over the prior year's result and above consensus estimates calling for $3.93 billion, per FactSet. On the downside, retail identical store sales were down 4.9% during the first-quarter; that was offset by a 12.4% increase in the company's wholesale segment. Looking at the bottom line, its net earnings from operations checked in at $12 million, or $0.04 per share, but when excluding one-time items that result jumped to $24 million, or $0.09 per share, which was still below analysts' estimates of $0.11 per share. 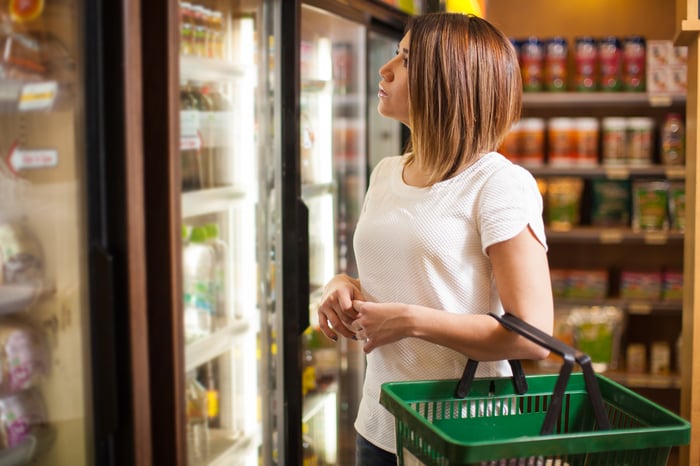 "The results generated this quarter by our Wholesale business were outstanding and demonstrate our ability to deliver on our strategy and commitment toward growing this segment," said President and CEO Mark Gross, in a press release. "Additionally, we're thrilled that we closed on the acquisition of Unified Grocers shortly after the end of our first quarter, and we're now working together as one team to drive the business and integration efforts forward. We'll begin reporting results in our second fiscal quarter that include the Unified business."

Part of the reason for Supervalu's surge today is likely because of the doom and gloom that had pounded grocery stocks after Amazon.com agreed to buy Whole Foods Market and investors hit the panic button. But a strong top-line result, even if comparable store sales declined, helped reassure investors that grocery stocks aren't facing imminent death by Amazon. Looking forward Supervalu anticipates its full-year net earnings to check in between $51 million to $70 million and adjusted EBITDA, including contributions from Unified Grocers, should check in between $475 million and $495 million.