Please ensure Javascript is enabled for purposes of website accessibility
Log In Help Join The Motley Fool
Free Article Join Over 1 Million Premium Members And Get More In-Depth Stock Guidance and Research
By Beth McKenna - Jul 25, 2017 at 9:05AM

3D printing investors may want to put Materialise on their watch lists.

3D printing stocks in general are having a good 2017 after getting clobbered for several years. But one stock in the group stands out above the rest for its superior one-year performance: Materialise (MTLS -3.56%).

The stock of the Belgium-based 3D printing company, which went public in June 2014, has gained a whopping nearly 107% in the one-year period through July 24. This performance far outpaces that of the three other pure plays that have market caps of at least $100 million and are listed on major U.S. stock exchanges -- 3D Systems (DDD 2.45%), Stratasys (SSYS -0.93%), and ExOne -- as well as the performance of manufacturing service provider Proto Labs, which has a fairly substantial and growing 3D printing business. 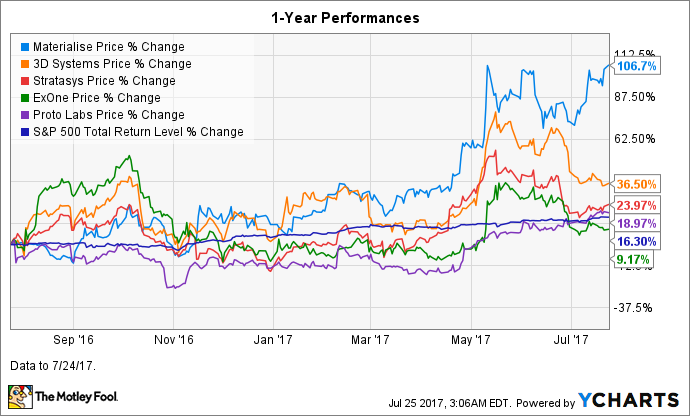 There are probably a few reasons Materialise, which provides 3D printing software and services, flies under most investors' radars:

Materialise was founded by its CEO Wilfried Vancraen in 1990, which means it has quite deep roots for a 3D printing company, as the technology was only invented in the mid-1980s. (For perspective, the two first-movers in the industry, 3D Systems and Stratasys, were founded in 1986 and 1989, respectively.) The company breaks its business down into three segments:

Financials are heading in the right direction

Materialise has been posting solid revenue growth, and its loss has been narrowing, with Wall Street analysts expecting the company to be very slightly profitable this year and even more profitable next year. In its most recently reported quarter, year-over-year revenue jumped 19.7% to 31.9 million euros, or $34.1 million. Net loss narrowed 74% to 816,000 euros, or $873,000, with loss per share narrowing 72% to 0.02 euros, or $0.02. Results by segment were as follows:

Data source: Materialise. YOY = year over year; EBITDA = earnings before interest, taxes, depreciation, and amortization. *Does add up to 100% due to rounding. **Corporate total, not the average of the three operating segments.

Software is by far the company's most profitable segment, which isn't surprising since software in general is a higher-margin business.

A promising stock, but pricey

With its revenue growing solidly and a return to profitability on the horizon, Materialise stock looks quite promising. (The company was actually slightly profitable when it went public and into 2015, but has more recently been investing to grow its business.) 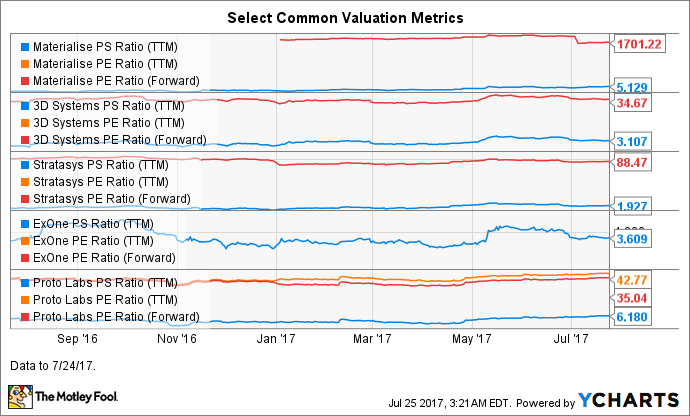 Materialise stock doesn't have a price-to-earnings ratio since the company is currently not profitable on a trailing-12-month basis. Relative to the other players in the chart, the stock's price-to-sales ratio of 5.1 is somewhat high, though we'd generally expect smaller companies to have higher valuations since it's easier for them to grow revenue and earnings on a percentage basis. (Materialise has a market cap of $671 million, while 3D Systems, Stratasys, and Proto Labs have market caps of $2 billion, $1.9 billion, and $1.3 billion, respectively.)

The stock's forward P/E of 1,701 is sky-high, though this isn't all that uncommon for stocks in high-growth industries that are growing revenue at a nice pace and are on the cusp of achieving profitability. Analysts are predicting more substantial EPS of $0.14 next year, so the one-year forward P/E is 99, which is still high, but much more palatable. A stock with these valuations isn't for the faint of heart, but more risk-tolerant growth investors could find Materialise stock a worthy watch list candidate.