A.O. Smith's (NYSE:AOS) prior quarter was going to be a tough act to follow. The company hit just about every mark you would want to see in a quarter, with higher-than-expected revenue and earnings. This quarter turned out to be an adequate encore: Earnings increased and management raised guidance as the company continued to capture significant growth in China. Here's a brief review of the water heater manufacturer's most recent results.

A.O. Smith's second quarter couldn't match the prior quarter regarding revenue growth, but it made up for it with a rise in net income. The biggest driver of those improved profitability results was sales in North America. Higher prices for its water heater sales in the U.S. and Canada helped to boost margins from 21.4% in the prior quarter to 23.2%. Home water filter business Aquasana, which the company acquired in August last year, continued to grow sales to $13 million for the quarter, but margins at the division remain significantly lower, and it has yet to make much of an impact on overall earnings.

Internationally, though, the company continues to rise in a big way. Revenue for its international segment -- which comprises Europe, China, and India -- grew 4.6% and 14% compared to the prior quarter and the corresponding period last year, respectively. Almost all of those gains can be attributed to growth in China. On a local-currency basis, water heater sales grew 20% year over year. Even more promising is the company's venture into water- and air-purification systems, which grew 40% and 400% (that's not a typo), respectively. The one downside to this astronomical growth is that the company's costs in China are also on the rise. Not only did materials costs eat into margins, but the company also did a lot of advertising spending to promote its water- and air-treatment systems in what it calls the tier 2 and 3 cities in the country. 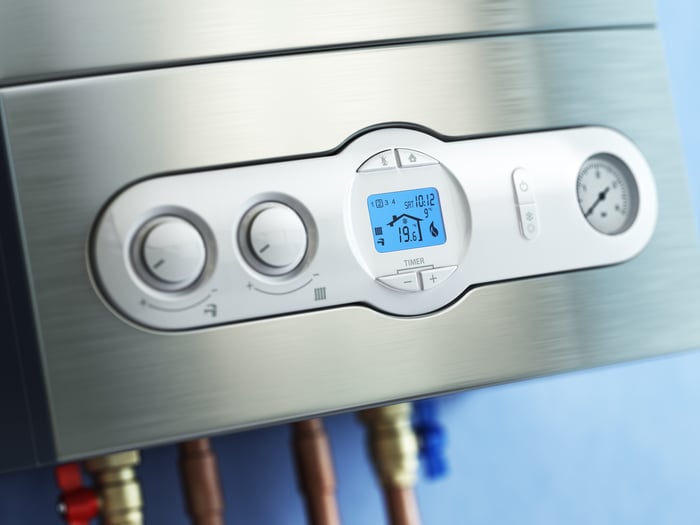 Even though the company continued its trend of building working capital in the quarter -- about $30 million -- it reversed the trend of burning cash in its operations to generate $37 million in free cash flow for the first six months of the year. The amount is still not enough to cover dividends and share repurchases so far this year, but that probably isn't a big issue. In 2016, the company had a sizable capital build in the first half of the year but ended up generating $365 million in free cash flow for the year. If investors don't start to see those working-capital trends change next quarter, they may have to ask why.

CEO Ajita Rajendra seemed pleased with the results and went out of his way to highlight growth in China. The company has been able to pull these growth levers so well that Rahendra even announced the company was upping its earnings guidance for the year.

We continued to see solid demand for our premium products in China with sales growth in local currency of 20 percent, led by water treatment and air purification. ... We expect continued solid demand for our products and project our global sales will grow between 10 and 11 percent this year. With record results in the first half of the year, we upgraded the midpoint of our 2017 guidance range and now expect full-year 2017 earnings per share to be between $2.07 and $2.11.  Our guidance excludes the impact from future acquisitions.

A.O. Smith is to investing what players with a high on-base percentage are to baseball. The business of selling water heaters won't get a whole lot of attention, and chances of home-run-like quarterly earnings results aren't that great. What investors get, though, is consistent performance that grows at a decent clip and produces high rates of return. This quarter was evidence of that as earnings continued to climb steadily. The company's international segment may be considerably smaller than its North American business, but at growth rates like these, it might overtake American sales before long. If A.O. Smith can start to exert some pricing power in China, it wouldn't be surprising to see the company maintain its current earnings growth track for a long time.