The engineering design company's deal with the aviation giant augers well for its long-term future.

It's not often that long-term considerations overshadow current trading matters on an earnings call, but that was the case with engineering design software company Dassault Systemes (DASTY 0.38%). In a nutshell, the company is on track with its objectives in 2017, but the announcement of Boeing's (BA 0.02%) decision to adopt Dassault's 3DExperience platform across its commercial aviation, space, and defense work grabbed the attention of investors. Let's take a look at the earnings report and the the Boeing announcement in more detail. 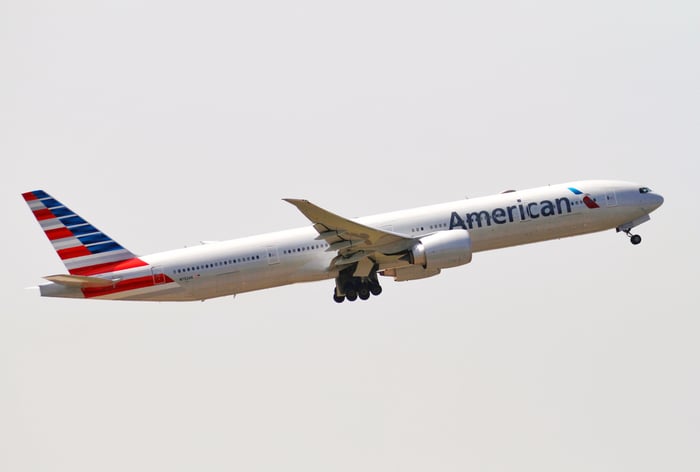 Dassault is a France-based company and reports in euros using International Financial Reporting Standards. You can think of non-IFRS in the same way U.S. companies report non-GAAP numbers in order to give a better understanding of underlying trading:

As you can see above, it was a pretty solid quarter for Dassault, and as such management maintained its underlying full-year guidance:

A few points on the guidance. First, the euro has strengthened against major currencies recently -- bad news for Dassault's revenue from non-euro countries -- and the new revenue guidance reflects a reduction of 50 million euros in revenue. As a consequence, the non-IFRS EPS target was reduced from a previous range of 2.67 euros to 2.72 euros. No matter: The underlying guidance is the same.

This is always the key to understanding growth prospects at Dassault. It's obviously good news that management reaffirmed the target for full-year growth of 8% to 10%. However, as you can see below, first-quarter growth was only 6% and second-quarter growth came in at 8%.

To be fair, management has previously argued that its new license sales growth was becoming more back-end loaded, meaning that relatively more sales would be achieved in the second half. CFO Thibault de Tersant explained, "We're counting on double-digit new license growth for both Q3 and Q4." That's something investors need to keep a close eye out for.

As you can see in the chart below, where the third and fourth quarters are shown in red, the back-end loading would mark a departure from previous years' trading. 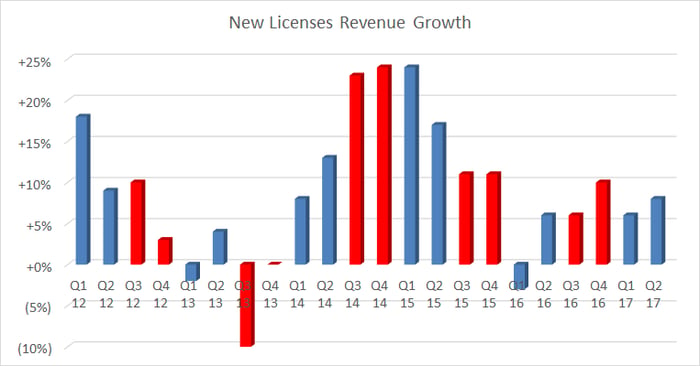 In case you're wondering why the Boeing deal didn't cause a hike in 2017 guidance, it's because, according to de Tersant, the Boeing deal won't ramp up until 2018, but it "should drive revenue growth for several years and represents a key inflection point in 3DExperience adoption by the market."

However, don't get too excited. Speaking on the earnings call, de Tersant also explained that Boeing was a "rental customer" rather than a purchaser of licenses. Moreover, even though there is a "substantial revenue increment" to come, it "is going to take multiple years actually to reach."

While the Boeing deal is significant in itself, it also marks success in convincing large corporations to use Dassault's 3DExperience solution -- a platform in which users of its engineering design software can collaborate with other company functions (such as marketing, sales, research and development, support, etc.) in order to create and support products.

The Solidworks software solution -- 3D computer-aided design (CAD) -- and 3DExperience represent the key revenue drivers for the company in 2017. Indeed, Solidworks software revenue grew 14% in the quarter compared to the 7% growth rate for Dassault software overall.

Speaking on the earnings call, de Tersant also described how Boeing's adoption of Dassault's technology in order to design the 777 aircraft had led to a pickup in adoption of digital solutions. Moreover, given the emphasis that General Electric Company and others are putting on the creation of digital twins -- in order to help companies better monitor and analyze their hardware -- it's not hard to think the Boeing deal could also drive 3DExperience adoption.

In the near term, Dassaut needs to hit its guidance, particularly with regard to new license sales in the coming quarters, and investors can look forward to reaping the benefits, direct and indirect, of the Boeing deal in the years to come.

3 Stocks Poised for Huge Growth Over the Next Decade
397%