The digital-entertainment technologist is firing on almost every cylinder right now.

Here's what you need to know about Dolby's third quarter.

Looking ahead, Dolby's management set up the revenue goalposts for the fourth quarter at roughly $240 million and an adjusted earnings target near $0.39 per diluted share. Hitting those targets would amount to approximately 3% year-over-year sales growth and a 14% earnings boost. These projections are consistent with Dolby's existing full-year revenue guidance, but profit margin is expanding and the new earnings guidance sits well above Wall Street's current consensus estimate of $0.31 per share. 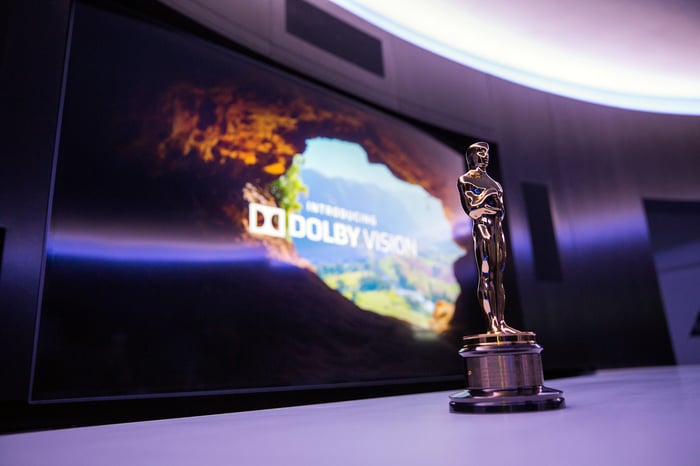 The two healthiest end markets in Dolby's portfolio right now are mobile devices and movie theaters. Licensing of the company's sound and display technologies increased by 18% in the mobile sector and 33% for the so-called "other" market, which includes Dolby's cinematic operations.

On the earnings call, Dolby CEO Kevin Yeaman highlighted a murderers' row of important partners who are fueling the company's growth. Walt Disney (DIS -0.90%) is releasing Guardians of the Galaxy, Vol. 2 on streaming platforms with support for Dolby Atmos sound and Dolby Vision HDR video -- a first for the House of Mouse. The first ultra-HD Blu-ray discs with Dolby Vision were released this quarter with titles from all the usual suspects except Disney.

Netflix (NFLX -1.52%) is using Dolby Atmos and Dolby Vision for all of its original content productions, and Yeaman called this out as "a significant step in the expansion of the Dolby Atmos ecosystem." Netflix was an early adopter of Dolby Atmos, and the partnership is still going strong.

That's just the tip of the iceberg, because Dolby's partner collection is a bustling bunch. It's not hard to see where the company's growth is coming from, and the organic expansion should hold steady for the foreseeable future. Consumers all around the world just can't get enough of Dolby's immersive video and sound solutions in this age of increasingly digital entertainment.