Fitbit Inc (NYSE:FIT) and Apple (NASDAQ:AAPL) may be two of the best-known stocks in the wearable space. Fitbit broke through with its ubiquitous fitness trackers earlier in the decade, while Apple's own smartwatch was highly anticipated before it first launched in 2015.

However, that's where the similarities between the two companies end. Tech giant Apple is the most valuable company in the world with a market cap of $800 billion, and it still relies on the iPhone for most of its sales and profits. Fitbit, on the other hand, is a pure-play wearable company worth a little more than $1 billion that has seen sales fall recently amid increasing competition in the industry and as smartwatches appear to be overtaking fitness trackers. 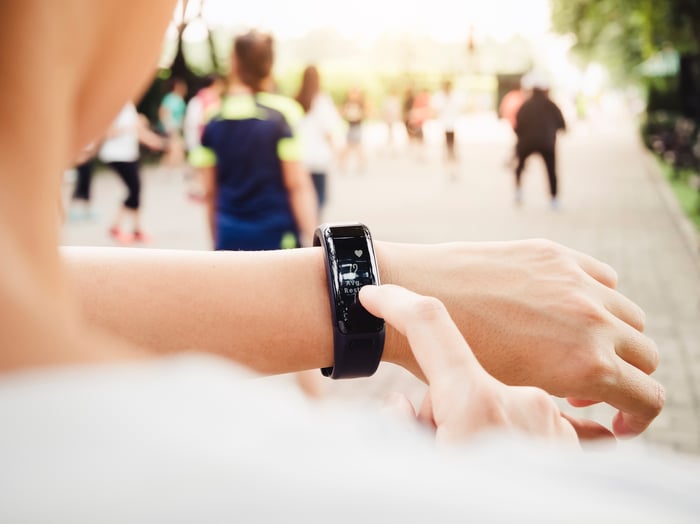 As the chart below shows, the two stocks have also gone in very different directions over the past year. 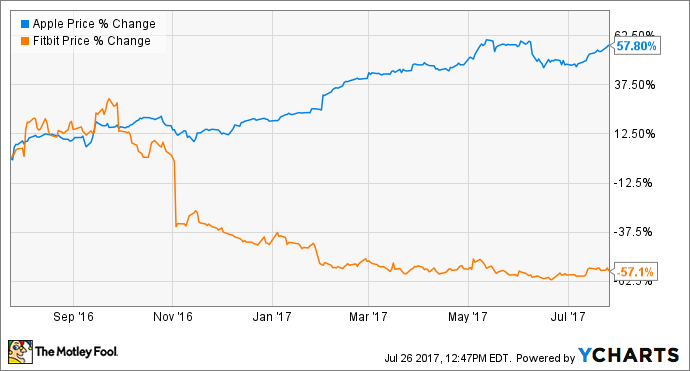 Still, tech trends can change quickly, and Fitbit is expecting a stronger second half of the year. Let's take a look at what each stock has to offer today to determine which one is a better buy.

A tech brand in transition

As the chart above shows, Fitbit shares have not fared well of late. In fact, the stock has been an undeniable bust since its 2015 IPO -- shares have fallen more than 80%. Revenue has plunged, and profits have flipped into losses. In its first quarter report, sales fell 41% to $298.9 million, and the company posted an adjusted loss of -$0.15 per share, down from an adjusted profit of $0.10 per share the year before.

CEO James Park noted that underlying demand was stronger than the numbers indicate as the company is still dealing with excess inventory from a disappointing holiday season. Fitbit cut 6% of its staff earlier in the year and shook up its management team, but new products will be crucial for any turnaround. According to leaked images, the company is working on a smartwatch code-named Higgs that is expected to have its own app store, waterproofing, four-day battery life, compatibility with Pandora, GPS tracking, and wireless headphones.

However, the release date is unknown, and reports have indicated disarray in the team working on the watch and a launch date that has been pushed back from this spring to fall. Meanwhile, Fitbit lost its title as the #1 wearable seller this year, falling behind Xiaomi and Apple, and many of its products continue to sell for discounts, not good signs for its earnings report next week.

Apple shares have surged over the past year, but its performance hasn't exactly been stellar. While revenue growth turned positive, it only increased by 4.7% in its most recent quarter, and profits remain below their peak at the end of 2015 despite the stock's surge.

However, Apple shares have risen on the bullish trend in tech stocks, particularly the giants in the FAANG group, and on solid performance of the iPhone. Services growth remains strong, increasing 18% to more than $7 billion in the most recent quarter, thanks to strong performance in the App Store. However, it may be anticipation for the 10th anniversary iPhone that's driving the stock higher.

Among the rumors circulating about the phone are that the home button will be removed and a larger screen will be installed that will reach the end of the handset.

Whether the new iPhone is a hit or not will go a long way to determining Apple's fortunes in the second half of the year. iPhone sales have been relatively flat recently as revenue rose 1% but unit sales fell 1% in the most recent quarter. Still, the smartphone makes up nearly two thirds of the company's revenue. With the recent stock surge, expectations for the new phone are high.

Who's the better pick?

Both stocks have their drawbacks here. Apple shares look stretched after running up more than 50% over the last year on little earnings growth, while Fitbit has been in a tailspin lately as the company puts its hopes on a new smartwatch.

Risk-seeking investors may be attracted to Fitbit as the stock could pop with such low expectations among analysts, who are expecting a widening loss this year -- but Apple is the better all-around pick. The company has one of the strongest brands in the world, and though it may struggle to grow sales significantly, they should continue to increase steadily. Its 1.7% dividend yield offers an additional incentive to own it. While the valuation may be stretched, it's a much safer option than Fitbit.