We Fools focus on the long term. Full stop.

Investing Foolishly entails buying in and holding on, and while we certainly monitor short-term developments, we are careful not to overweight a single event or quarter so that we don't miss the forest for the trees. In that sense, Facebook (NASDAQ:FB) is far more Foolish than Snap (NYSE:SNAP), and that's a good thing. 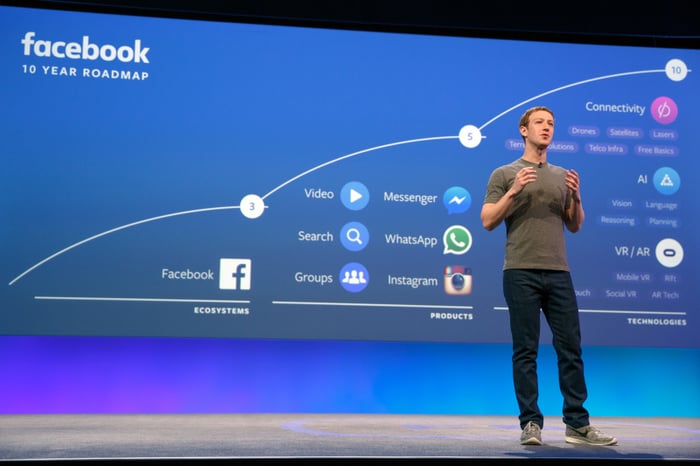 Consider this quote from Mark Zuckerberg on the second-quarter earnings call last night:

Next, I want to give a quick update on what we're building over our three time horizons: Making our existing services more useful now, building new ecosystems over the next five years around our products that a lot of people already use, and creating foundational technologies to achieve our mission over the next 10 years.

This isn't the first time that Zuckerberg has referenced 10-year time horizons. He refers to 10-year roadmaps quite regularly, including in the picture above from Facebook's F8 developer conference in 2016. The operative word here that's worth appreciating is "our." Focusing on long-term goals at Facebook is institutional and systemic, because that is the culture that His Zuckness has instilled upon the company.

There are many examples. Facebook has been developing Messenger for many years, acknowledging that monetization comes after building a strong product that mainstream consumers adopt. The dubious $19 billion acquisition of WhatsApp follows the same rationale.

Another example is investing in the necessary infrastructure to facilitate a good user experience with video content. Facebook has been working on it for years. This example is particularly telling since how Facebook and Snap approach their infrastructure requirements tells investors an awful lot about where each company's respective temporal focus is.

Snap doesn't appear to have any sort of long-term strategy, in more ways than one. The most obvious one is the company's unique approach to cloud infrastructure, opting to completely outsource cloud infrastructure and hosting. Snap relies entirely on Alphabet subsidiary Google and Amazon's Amazon Web Services (AWS) to handle bandwidth.

This has some very real short-term benefits. By outsourcing to the pros, Snapchat can remain extremely reliable, and handle just about anything you throw at it in terms of cloud computing power. But that benefit comes at a price: variable costs. Snap's cost structure is highly variable and scales with usage of its service, which means that operating leverage is nearly impossible for the freshly public company to enjoy. Most tech companies love operating leverage, since it allows them to scale rapidly and deliver margin expansion to investors. But operating leverage requires a certain amount of fixed costs.

Most start-ups, when they get to the operational size that Snapchat is currently, choose to invest in building out their own infrastructure. Doing so does costs more upfront, but it pays off over time in long-term savings. Why pay someone ongoing fees for something that you can do yourself if you're willing to put in the effort (and money)? Snap's approach to the cloud is strategically and financially myopic.

Snap has only been public for a few months, so investors don't have a library of transcripts to parse through like they do with Facebook. But in the first earnings  call, the only reference to a long time horizon was this snippet from CEO Evan Spiegel, responding to an analyst question about the years ahead:

Yes, sure. I think the big issue with advertising over the next decade or so, frankly, is going to be education. I think we have world-class ad units. They are delivering ROI. We've done a lot of work this year to build out the measurement side of the business.

It's a fairly vague answer, and gives absolutely no insight into product vision or long-term strategy over "the next decade or so." It's almost as if Spiegel is speaking directly to advertisers, begging them to try out Snapchat ads in an effort to reach younger demographics. Snap now calls itself a "camera company." Where will a "camera company" be in 10 years?