Shell generated more than $11 billion in cash from operations and has mostly completed its integration of BG Group.

For the past couple of years, the largest concern investors had with integrated oil and gas companies was their cash-generating abilities. If cash flow from operations couldn't live up to their ambitious capital spending plans, were dividend payments at risk of getting cut? One company that looked like a prime candidate for a dividend cut was Royal Dutch Shell (RDS.A) (RDS.B). Its dividend yield was sky-high, and cash generation had almost evaporated.

Over the past couple of quarters, though, Shell's cash flow has come flooding back, and the company added to that this quarter with more than $11 billion in cash from ops. Here's a look at the company's most recent results and what Shell can do now that it has alleviated this cash-flow issue. 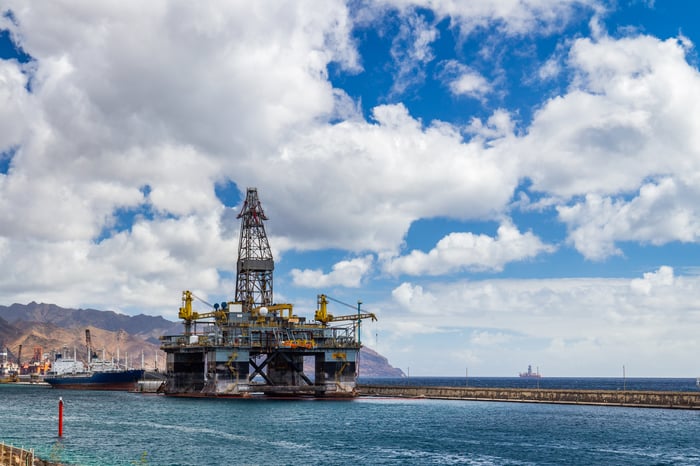 For a while now, Shell's management has emphasized delivering free cash flow. It would seem that, based on these second-quarter results, management has delivered on that promise all while integrating BG Group into the fold. Not to be overly critical, but that cash-flow result did get a bump from a $2 billion drawdown of working capital -- compared to last quarter's $1.8 billion build. On average, though, the company is delivering more than $9 billion in free cash flow on a rather consistent basis, the best among the integrated oil and gas companies right now.

One thing that seems a bit out of place is the gobs of operational cash but rather tepid net income result compared to the prior quarter. A decent chunk of that has to do with a write-down related to the sale of several assets including Canadian oil sands, an offshore gas project in Ireland, and the sale of its portion of the Motiva joint venture refining business in the U.S. Gulf Coast. Without these charges, second-quarter results would have been much more in line with the prior quarters. Also, keep in mind that charges and impairments are non-cash events that only affect earnings and not physical cash going in and out of the business.

No single catalyst led to better results this past quarter. Rather, it was marginal improvements or setbacks across the board. Perhaps the most impressive one, though, is the reversal of its upstream results. Even though oil prices aren't that much better than this time last year, Shell's adjusted earnings have improved considerably. 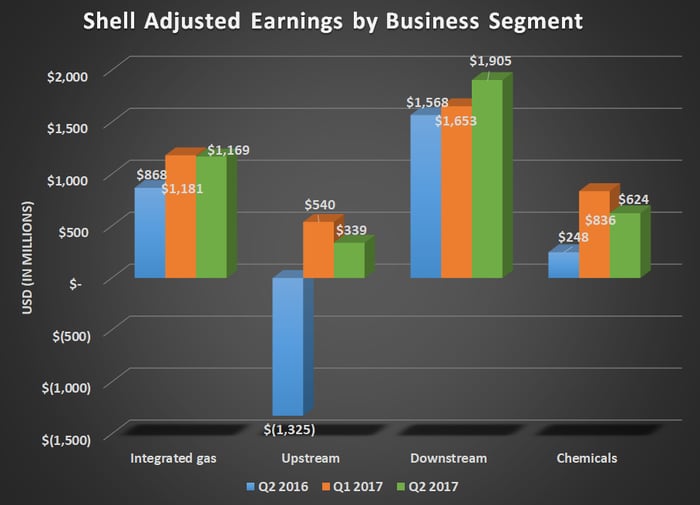 The priority for all of that cash coming in the door thus far has been reducing the company's leverage. Shell took a big leap forward this past quarter in that regard by paying back $3.3 billion in debt. With the added cash on the balance sheet from all those asset sales, Shell's net debt is down from $75 billion this time last year to $66 billion today, or a gearing of 25.3%.

CEO Ben Van Beurden has to feel good about these results, especially when you consider that the company has been trying to accomplish the two goals at the same time -- lower operating costs and bring a $50 billion acquisition into the fold. Here's Van Beurden's statement that came with the company's most recent results:

Shell's strong results this quarter show that we are reshaping the company following the integration of BG. Cash generation has been resilient over four consecutive quarters, at an average oil price of just under $50 per barrel. This quarter, we generated robust earnings excluding identified items of $3.6 billion, while over the past 12 months cash flow from operations of $38 billion has covered our cash dividend and reduced gearing to 25%. The external price environment and energy sector developments mean we will remain very disciplined, with an absolute focus on the four levers within our control, namely capital efficiency, costs, new project delivery, and divestments. I am confident that we are on track to deliver a world-class investment to our shareholders.

I'll admit I had my reservations about Shell's ability to integrate BG Group, lower costs, and improve rates of returns. It seems that the company has done it, though. Management wants to sell another $10 billion or so in assets before its divestment plan is complete. Once it does, that will either give the company a massive war chest of cash to redeploy into the business, or lower its debt to make those investments further down the road.

The winds of the oil and gas market are starting to change, and some of Shell's peers are looking to spend more money now and lock in cheap oil service contracts. The next question Shell investors will start to ask is when Shell plans to do the same, and how it intends to deploy that capital. Hopefully, in a couple of months, we will get a more detailed look at those plans now that Shell has completed some significant milestones.