The energy industry has remained volatile in 2017, as crude oil prices have fluctuated wildly and presented challenges to the companies that try to profit from oil and natural gas. Oil services company TechnipFMC (FTI 2.94%) has faced challenges in navigating the ups and down of the industry and its clients' needs, and the stock has remained under pressure thanks to the uncertain outlook for crude and the impact low prices could have on exploration and production companies' decisions to move forward with future projects.

Coming into Thursday's second-quarter financial report, TechnipFMC investors fully expected further declines in revenue, but they hoped for better performance on the income line. TechnipFMC once again delivered on that front, and even with future challenges ahead, investors appear to see at least a chance for a full-blown rebound in the future. Let's look more closely at TechnipFMC and what its results say about the current conditions in the industry. 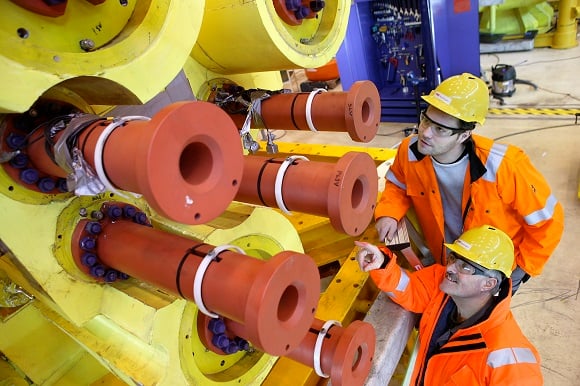 TechnipFMC's second-quarter financial report highlighted the approach the company has taken to try to weather the storm in the energy industry. Pro forma combined revenue plunged more than 22% to $3.85 billion. Yet net income tripled from year-ago levels, and adjusted earnings of $0.45 per share topped the consensus forecast among those following the stock by $0.07 per share.

Looking more closely at TechnipFMC's results, the company's different business units had widely disparate performance. The subsea technologies segment took the biggest hit, with revenue falling 28% and sending operating profit down by nearly 10%. Reduced activity levels in Europe and Africa outweighed a pickup in projects in the Asia-Pacific region, but cost reductions, restructuring activities, and strong execution helped to boost margin figures by five percentage points and limit the damage to profit. Backlogs amounted to $6.19 billion.

For the onshore/offshore segment, TechnipFMC overcame falling sales to produce a nice jump in profit. Revenue declined 20% for the segment, but operating profit more than tripled, and adjusted pre-tax operating income was up almost 85% from year-ago levels. Several project completions weighed on revenue, but as the company reached construction milestones, it made projects more profitable, and favorable resolutions on certain contracts also helped the bottom line. Segment backlog came in at $8.58 billion.

Surface technologies performed best of all for TechnipFMC. Revenue was down just 1%, and despite a small GAAP operating loss, adjusted pre-tax operating earnings more than quadrupled. Overall, total inbound orders for all segments came in at $3.15 billion, and backlog was $15.2 billion across the business.

Can TechnipFMC climb out of its hole?

CEO Doug Pferdehirt was pleased with how TechnipFMC did during the quarter. "As a result of our solid execution, achievement of key project milestones, and intense focus on efficiency," Pferdehirt said, "we delivered strong performance across all segments." The CEO pointed to much better than expected performance in the subsea and onshore/offshore units as a sign of confidence that TechnipFMC should be able to do even better in the second half of the year.

TechnipFMC's guidance stayed largely the same as last quarter. The company expects subsea revenue of $6.1 billion or more, onshore/offshore sales of $7.3 billion, and a minimum of $1.4 billion from the surface technologies segment. TechnipFMC boosted its predictions for adjusted pre-tax operating margin for the onshore/offshore unit from 6.5% up to 8%. That still lags behind the expected 13% from surface and 17% from subsea, but it reflects the better performance that onshore/offshore has shown lately.

Investors in TechnipFMC seemed modestly pleased with the report, and the stock was up just over 1% at midday following the announcement. TechnipFMC still has a long way to go before it can fully recover, but its efforts thus far have prevented the company from seeing more damage to its financial condition.