Shares of cloud-based messaging platform provider LivePerson (NASDAQ:LPSN) surged on Thursday following release of the the company's second-quarter report. Results were mixed relative to analyst expectations, but a guidance boost was enough to send the stock 13% higher by 11:30 a.m. EDT.

LivePerson reported second-quarter revenue of $54.1 million, down 4.6% year over year but nearly $3 million higher than the average analyst estimate. Revenue from business customers totaled $49.6 million, while consumer operations generated $4.5 million of revenue. LivePerson expects its platform transition, which is currently knocking down revenue, to end during the third quarter, with growth returning in 2018. 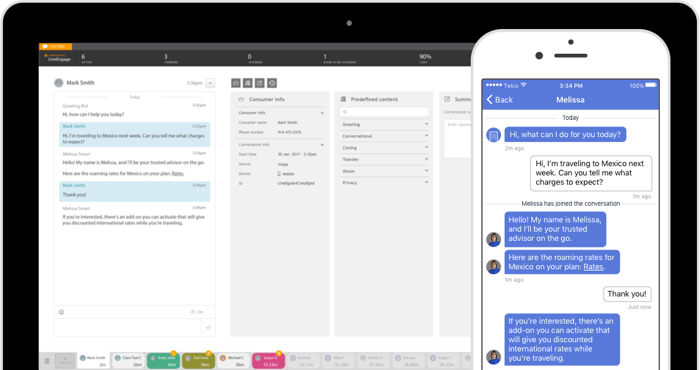 Non-GAAP EPS came in at $0.01, flat compared to the prior-year period but $0.01 below analyst expectations. Costs declined along with revenue, allowing the bottom line to hold up despite slumping sales.

LivePerson CEO Robert LoCascio pointed to some major developments during the second quarter: "We forged a major global partnership with IBM, added Apple Business Chat to our ecosystem of messaging front ends, and signed several leading financial institutions for messaging, complementing the recent strength we have been seeing in telecommunications."

While LivePerson's results were mixed, the company raised its full-year guidance, a positive development that sent the stock soaring. LivePerson now expects to produce revenue between $213 million and $216 million, up from previous guidance calling for revenue between $204 million and $209 million. Adjusted EPS is expected to be between $0.07 and $0.11, with the high end of that range reduced by $0.01 compared to previous guidance.

With LivePerson anticipating a return to growth next year, investors are taking the boosted revenue guidance as an indication that better days are ahead.