Moog (NYSE:MOG.A) (NYSE:MOG.B) has seen substantial growth in recent years in its precision components and systems business, largely because of favorable conditions for the key industries that it serves. In particular, the aerospace sector has been a huge source of support for Moog, and rising demand from airlines and other players in the commercial aerospace industry have played a vital role in Moog's stock performance over the past couple of years.

Coming into Friday's fiscal third-quarter financial report, Moog investors expected the company to tread water for a short period, with slight declines in earnings and flat sales. Instead, Moog kept the good times going, and bottom-line gains and substantial growth in revenue pointed to better times ahead. Let's look more closely at Moog's results and what they say about the company's future. 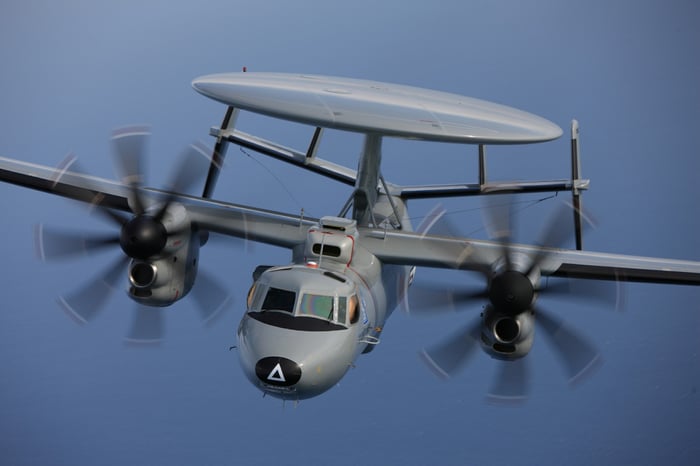 Moog's fiscal third-quarter results gave investors what they wanted to see. Revenue was up 2% to $626 million, which was well above the $613 million consensus forecast among those following the stock. Net income climbed 10% to $40.1 million, and that produced earnings of $1.11 per share, easily topping the $0.88 per share most investors were expecting.

Taking a closer look at Moog's numbers, the components and systems specialist kept seeing strength and weakness in the same areas as in previous quarters. The components segment was the winner during the quarter, with segment revenue gaining 7%. Aircraft controls came in a close second with 4% growth, and the space and defense controls business posted a solid gain of more than 2%. Only the industrial systems segment suffered declines on the top line, sinking 6% from year-ago levels.

Interestingly, though, Moog's profitability trends moved in nearly the opposite direction. Operating profit fell in three of four segments, with only the industrial systems business seeing gains, putting in an 8% rise. The aircraft controls and space and defense controls units were the weakest, with segment operating profit declines of 12% and 11%, respectively.

Moog gave good explanations for the performance of its business units. For aircraft controls, a big jump in sales of original equipment manufacturer products to Airbus resulted from higher sales of the company's A350 aircraft. By contrast, sales to Boeing (NYSE:BA) were down from year-ago levels, and military aircraft-related sales were down as well. Moog's divestiture of its European space business was offset by strong demand for ground vehicle and naval systems on the military side. Specialty components performed very well during the quarter, but weakness in energy sales and industrial automation weighed on the industrial side of the business.

CEO John Scannell was succinct in his comments, saying only that "Q3 was another good quarter" and that the 2017 fiscal year "is shaping up nicely." Scannell also sees stronger operational performance helping to drive Moog's results still higher in the near future.

In response to the positive experience, Moog increased its guidance for the full fiscal year. The company now believes that it will bring in $2.46 billion in sales during the year, up $10 million from its previous forecast. Earnings should finish in a range between $3.65 and $3.85 per share, which boosted the midpoint by $0.25 per share and narrowed the range by $0.05 on each end. Stronger operating margin will rise above the 10% level, and solid cash flow from operations should continue throughout the year.

Moog investors didn't react very strongly to the news, and the stock was close to unchanged at midday on Friday after the announcement. The company has plenty of opportunities to keep growing on multiple fronts, and if it can execute well, then Moog should be able to keep its fundamental financial strength intact indefinitely into the future.