Perhaps the ultimate buy-and-hold investor, Warren Buffett has kept a small selection of stocks in his Berkshire Hathaway (NYSE:BRK.A)(NYSE:BRK.B) for a long time. Make that a really long time, as some of his holdings stretch back decades, through market spikes and crashes, across economic booms and busts.

Of this group, two stocks stand out in particular. Warren has kept them in the Berkshire portfolio for more years than many of us have been alive. Here's a look at this pair of sturdy Buffett favorites, American Express (NYSE:AXP) and Coca-Cola (NYSE:KO).

Buffett's buy into AmEx occurred in the wake of the all-but-forgotten "salad oil scandal" of the early 1960s. The financial services company provided millions of dollars in loans to a New Jersey-based firm, collateralized by -- of all things -- the firm's supposedly robust supplies of salad oil.

This abundance was soon discovered to be a lie, and the firm's creditors took a huge bath on their loans. At the time, there was some question as to whether AmEx would be able to survive as a company. Ignoring the hysteria, Buffett placed a $20 million bet on a 5% stake in AmEx for his then-investment vehicle Buffett Partners, a holding that was soon transferred to the successor venture, Berkshire Hathaway.

Buffett has never relinquished his grip on AmEx, eventually plowing nearly $1.3 billion into it. What he told investors at a 1995 Berkshire Hathaway annual meeting reveals a big reason why. "By far the most important factor in [Amex's] future for a great many years to come will be the credit card. We think American Express's management thinks well about... how to keep the card special," Buffett said.

Even now, AmEx plastic is considered a cut above the standard credit card on the market, and the company effectively wields this competitive advantage. It's still a good investment, even if developments over the past few years -- the loss of its beautiful exclusivity deal with Costco Wholesale, among other defeats -- have made the stock price appreciate less than rivals Visa and MasterCard.

At the end of 2016, Berkshire Hathaway held nearly 152 million shares of AmEx, giving it almost 17% of the company. At the time, the total market value of that holding was $11.2 billion.

A tall, frosty bottle of profit

Buffett surprised many stock market observers when, in 1988, Berkshire Hathaway loaded up on Coca-Cola. By some of the most important yardsticks, Coke was an expensive stock -- its share price had risen by almost 20% annually for eight years in a row, and at the time of the buy it was trading at around 15 times earnings (typical Berkshire Hathaway purchases were valued much more attractively).

Yet Buffett was a true believer. That's because with the appointment of CEO Roberto Goizueta "Coca-Cola had in 1981 become a new company," Buffett wrote in one of his famous annual letters to Berkshire Hathaway shareholders.

He added that Goizueta "first rethought and focused the company's policies and then energetically carried them out. What was already the world's most ubiquitous product gained new momentum, with sales overseas virtually exploding." 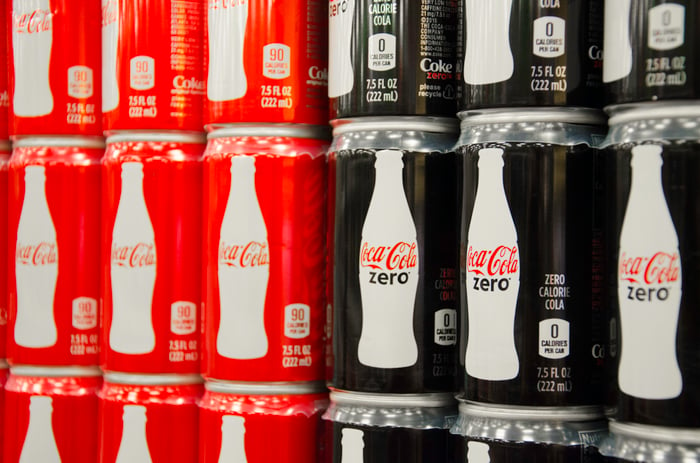 In other words, Coke was virtually a new, much grander company than it had been before, despite its long ubiquity on the market. Buffett plonked down just over $1 billion to acquire more than 23.3 million Coke shares.

It was a fine, opportunistic buy. These days, after numerous stock splits and fresh buys over the years, Berkshire Hathaway holds 400 million shares, or over 9% of the massive company. Although it's now struggling somewhat in the face of the healthy eating/drinking movement, Buffett's Coke holding was worth $16.6 billion at the end of last year.