Maybe this is actually the device we heard about last week. Speculation had emerged that Facebook (NASDAQ:FB) was preparing to launch a smart speaker, joining a growing list of tech giants looking to meet consumer demand. The most peculiar aspect of the report was that it was rumored to have a massive 15-inch touchscreen, which sounds downright comical for a speaker.

Bloomberg is reporting today that Facebook is working on a video chatting device, which would be the first product to emerge from its Building 8 hardware department. The device may feature a large 13-inch to 15-inch "laptop-sized touchscreen." To be clear, Bloomberg's sources say that the social network is indeed working on a smart speaker, but it appears that the report last week from DIGITIMES, which has a mixed track record, could have been the result of crossed wires (I trust Bloomberg over DIGITIMES any day of the week). 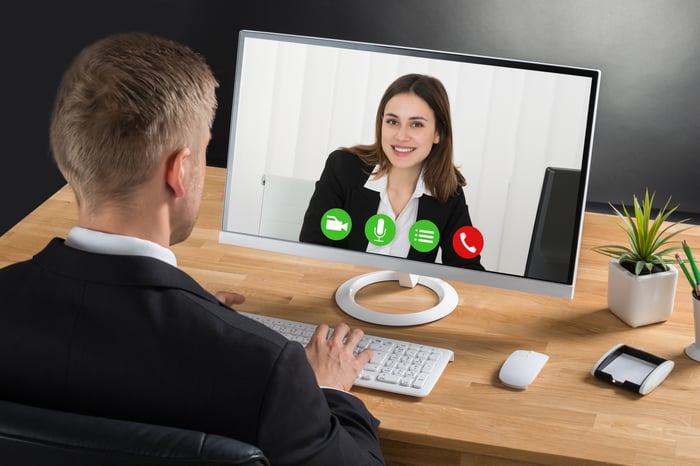 In terms of other product details, the video chatting device is expected to have a wide-angle camera lens, microphones, and speakers, alongside a virtual assistant powered by artificial intelligence (AI). The prototype sounds like a computer monitor, standing vertically on a stand. The company may take a page out of Amazon.com's playbook by using a version of Android instead of having to develop its own operating system from scratch. Presumably, this refers to a heavily modified ("forked") version. Amazon's Fire OS that powers its Fire line of tablets is a forked version of Android.

The rumored device will automatically scan a room for people and "lock onto them," according to the report. This could allow it to intelligently zoom in and emphasize items within its field of vision. Facebook is even testing a version with a 360-degree camera. These details are a bit ironic, seeing as how CEO Mark Zuckerberg covers the webcam and microphone on his laptop with pieces of tape due to privacy and security concerns. Now Zuck Dawg could be preparing to ask consumers to purchase and install an AI-powered device that is quite literally watching, tracking, and listening to you at all times.

As far as price goes, it could cost "a few hundred dollars," according to Bloomberg's sources.

Why this is misguided

It's probably a bad idea for Facebook to launch this video chatting device. For starters, it's not a new idea. Companies have been trying to create a consumer market for single-purpose video chatting systems for decades. Even a heavyweight like Cisco introduced Umi, a consumer-oriented home videoconferencing system, in 2010. It didn't last long, getting discontinued just two years later. One of Umi's fatal flaws was a high price tag combined with ongoing subscription fees.

Most modern consumer devices offer some type of video chatting capability these days. Facebook's own Messenger and WhatsApp services, which are broadly available across platforms, have video chatting features. If Facebook wants to expand further into video chatting, which strategically makes sense, it can do so by leveraging its existing services. It doesn't need to venture into hardware or create a new (forked) platform, where it has little to no experience.

The price is also wrong for a single-purpose device. A "few hundred dollars" can buy you a small, multipurpose tablet that can be used for video chatting in addition to a million other things. If someone wanted to video chat on a larger laptop-sized display, they could just use...a laptop that they probably already have.