The company signs huge contracts, but Wall Street may be worried about slowing growth in the second half.

When a pair of Utah graduate students were tasked with designing a business plan to address the needs of the education world, their plan became what is today Instructure (INST). The company provides a learning management system platform, called Canvas, that both K-12 and higher-education schools can use to augment their services.

Today, the company is run by Josh Coates -- the professor teaching said course, and the primary funder in the early days. With the company's release of earnings this week, it's clear that it's on the path to winning over huge customers, though profitability remains elusive, and it'll be interesting to see if it can meet its goal of being free cash flow-positive by the end of the year. 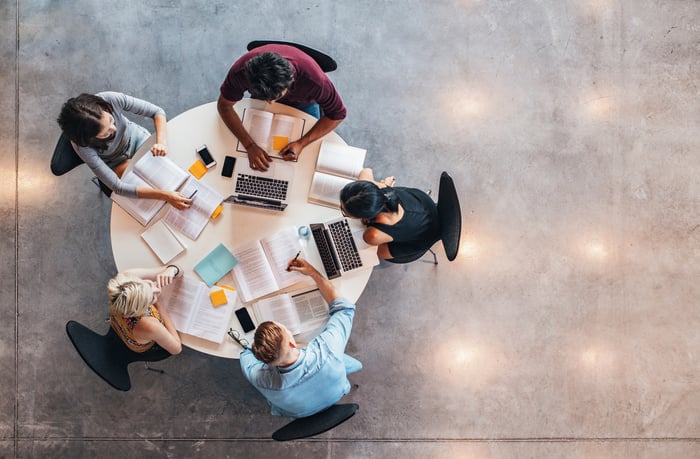 While we'll get into the weeds later on, it's worth noting how the company performed on the headline metrics.

Both the revenue and earnings figures came in ahead of the best-case scenario management had spelled out three  months ago. In addition, while the company derives some revenue from training and onboarding its customers, it is the subscription software-as-a-service (SaaS) model that drives the company's results. On that front, operating margin expanded 52 basis points on the quarter, and 177 for the first six months of 2017.

Instructure seems to be hitting a tipping point as well, where it hasn't had to spend nearly as much to drive its business. While revenue was up 47%, sales and marketing was up just 18%, while both R&D and G&A grew by 27%. All told, that wasn't enough to push the company into profitability, but it brought it closer than most were expecting.

Because it is yet to be cash-flow positive, cash burn is especially important to keep an eye on. Three months ago, Instructure had $38 million  in cash on hand, versus zero long-term debt. Somewhat alarmingly, that cash figure has dipped all the way down to $26 million -- meaning the company will either be forced to take on debt or make a secondary offering if it doesn't start generating cash soon.

CFO Steve Kaminsky sought to reassure investors this wouldn't be a problem:

We are heading into our busy season and Q3 is historically a large cash generating quarter. In fact, we are on track to collect more in July than in all of Q2. ... [W]e remain confident that we will be cash flow positive in the second half of this year and also for the full year of 2018.

If true, that would be a huge deal for investors, as they'll soon get a peek into the type of recurring cash flow that this SaaS can generate.

On the balance sheet, one of the huge increases was in accounts receivable -- which quadrupled to over $70 million. While that may normally be a cause for concern, Kaminsky explained  it had more to do with the timing of new contracts to coincide with the start of the fiscal year in July.

In the end, that's probably because the company scored a number of very big contracts in the quarter, including:

In addition, Instructure added at least five international schools that totaled enrollment of over 80,000 students. And it signed a major contract win for its Bridge corporate platform, with Atlanta's Hartsfield-Jackson Airport signing on to help train its 11,000 employees and use Instructure's Arc video platform to make PSAs, as well as weather and security announcements.

The company also introduced a new platform, called Gauge, to track and assess student performance at the K-12 level.

The midpoint outlook management provided calls for revenue growth of 35% in the third quarter, followed by 30% in the fourth quarter. Non-GAAP earnings are expected to narrow by 9% and 10%, respectively, from the same time frame in 2016.

Overall, the market is likely in a wait-and-see approach, as this calls for a somewhat significant slowdown in revenue compared with the second quarter. At the same time, the two most important metrics for investors to watch will be if the company truly can become cash-flow positive in the third quarter, and how many big-name organizations it's able to sign on by the end of the year.

Given the high switching costs associated with the platform, and revenue retention rates that still hover above 100%, grabbing market share now in favor of profitability is definitely the best long-term move.