This was supposed to be a big summer for Central Florida's theme parks. Disney (NYSE:DIS) opened Pandora-The World of Avatar at Disney's Animal Kingdom, the resort's most ambitious theme-park expansion in years. Comcast's (NASDAQ:CMCSA) Universal Orlando opened Volcano Bay, the water park it was billing as its third theme park. SeaWorld Entertainment (NYSE:SEAS) was hoping to breathe new life into an aging coaster by providing guests with virtual-reality headsets on Kraken Unleashed.

Things haven't played out the way that Disney and its peers would've liked. The Avatar-themed land may have opened to critical praise, but it may not be enough to save the media giant's sluggish-attendance trends. Let's go over some of the troublesome signs that suggest we may not be in for a summer of theme-park love. 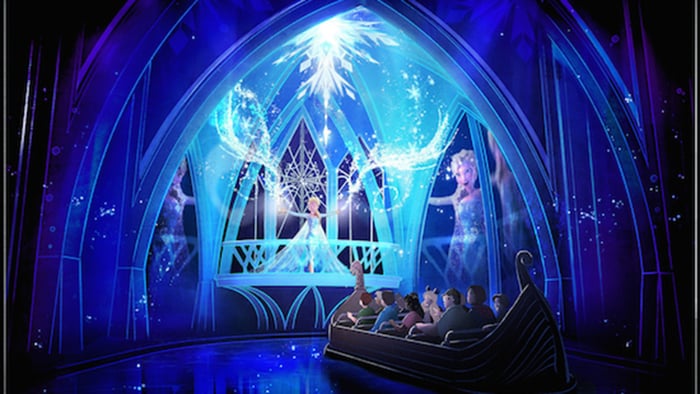 Disney World may be "Frozen" in more ways than one this summer. Image source: Disney.

What's good for one theme park is generally good for the others. Comcast's transformational Wizarding World of Harry Potter has naturally resulted in a spike in turnstile clicks at Universal Orlando, but it's also drawing tourists to the region, where they may also experience a side trip to Disney World or SeaWorld Orlando.

Theme parks need shiny new attractions to woo return visits, and Universal Orlando and SeaWorld haven't been at their best this summer. Volcano Bay has been marred by negative reviews, stemming largely from the hours that guests have to wait between going on some of the more popular water slides, given the park's low capacity and poorly conceived ride-reservation system. SeaWorld Orlando has seen its overall capacity also take a hit given the ridiculously slow coaster turnover on Kraken Unleashed.

Disney World and SeaWorld Orlando have been riding Comcast's coattails in recent years, allowing Disney to phone it in as Universal Orlando raises the bar. It's Disney's turn to do the heavy lifting this summer with Pandora, and it may not be enough.

Disney World's hotels aren't cheap, and typically, the House of Mouse doesn't have any problem filling its rooms at steep rates. However, Disney hotels started appearing on Hotwire, and have been available with minimal sleuthing through Priceline Express at big discounts since late March.

Disney also recently began a limited-time promotion for its annual passholders, offering as much as 30% off at some of the resort's higher-end hotel restaurants. A markdown-mad Disney is probably not what investors want during peak travel periods.

3. Pandora's growth may be coming at the expense of its other parks

The opening of Pandora has made Disney's Animal Kingdom a popular choice for visitors, and its sister parks don't feel as busy this summer. Vacation planner and wait-time-watcher TouringPlans.com reported last month that the spike in visits to Disney's Animal Kingdom has come largely at the expense of trips to Epcot, Disney's Hollywood Studios, and -- to a lesser extent -- the Magic Kingdom.

It doesn't help that Disney's Hollywood Studios has large chunks of the park walled off as construction zones, and that the Magic Kingdom hasn't had a new ride open in more than three years. This won't be a problem in a few years with Disney making major upgrades across its gated attractions, but right now, it's just stealing from Pluto to pay Goofy.

4. Finding good help is getting harder

It's not just getting harder to attract guests -- Disney World is now shelling out more money to fill job openings. The Orlando Sentinel is reporting that the resort's boosting its signing bonus for cooks and chefs from $500 to $1,000 or $1,500. It also recently began offering $500 signing bonuses to its lifeguards, bus drivers, and housekeepers.

Disney explains that it periodically adjusts incentives based on hiring needs, but if it's having a problem attracting what it calls cast members, it could squeeze the segment's operating margin.

5. Even Disney's Animal Kingdom may be tiring

Disney opened Pandora to heavy fanfare, and from Memorial Day weekend through shortly after the Fourth of July holiday, we saw Disney's Animal Kingdom opening at 8 a.m. and closing at 11 p.m. to accommodate the surge in traffic. The park is now opening an hour later and closing an hour earlier, a surprising move since July and early August are still considered historically busy summer travel seasons.

One can argue that this is by design, but the fact that the park still hosts a Rivers of Light show at 10:30 p.m. -- a full half-hour after the park is now officially closed, but necessary given the required nighttime setting -- suggests that not increasing the hours the way it did earlier in the summer is a knee-jerk reaction to diminishing interest, which warrants keeping the park open 11 hours a day instead of 13, as before.

We'll get a clearer picture on things when Disney reports quarterly results in a few days, but for now, it seems as if the once-promising blowout summer has turned into a ho-hum affair.