Please ensure Javascript is enabled for purposes of website accessibility
Log In Help Join The Motley Fool
Free Article Join Over 1 Million Premium Members And Get More In-Depth Stock Guidance and Research
By Matthew DiLallo - Aug 2, 2017 at 11:55AM

Though the Permian Basin driller blew past earnings expectations, it tapped the brakes on its forecast.

Shares of Pioneer Natural Resources (PXD 2.44%) are getting pummeled today, down 11.4% as of 11:49 a.m. EDT, after the shale driller reported second-quarter results.

Those results were actually quite good. Thanks to continued strong well performance, production came in at the high end of Pioneer's guidance range. Because of that, and falling costs, the company earned an adjusted $38 million, or $0.21 per share, which was $0.09 per share ahead of expectations. 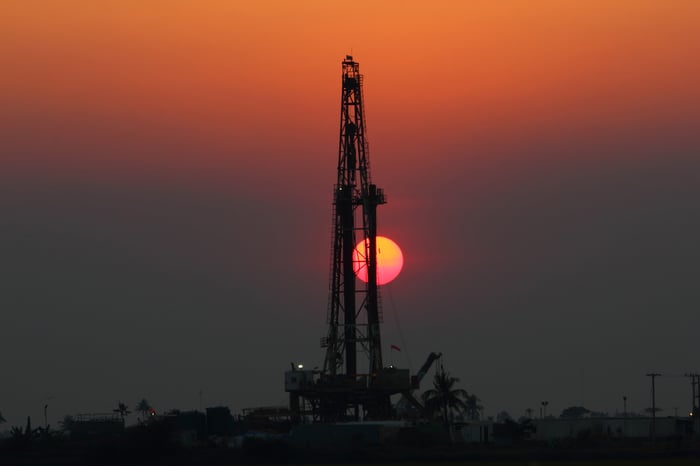 Instead, what's throwing investors for a loop is the company's guidance. CEO Tim Dove stated in the earnings release:

On the one hand, the decision to defer those well completions into next year doesn't sound like a bad idea considering where crude prices are these days. In fact, several rivals are doing the same thing.

That said, for a company that has routinely exceeded its growth guidance, even in the depths of the downturn, this caught investors off guard -- especially when rivals Devon Energy (DVN 2.20%) and EOG Resources (EOG 2.96%) recently increased their guidance. In Devon's case, it now expects to exit 2017 producing 18% to 23% more oil in the U.S. than last year, which is not only higher than its previous guidance but comes despite cutting $100 million out of its budget. Meanwhile, EOG Resources increased its 2017 oil growth guidance from 18% to 20% while maintaining its spending plan.

The other issue with Pioneer's guidance is an unexpected increase in the gas-to-oil ratio, which means that its wells are producing a higher volume of gas than expected. Because of that, the company only expects oil to be 58% of production this year, which -- while up from 57% last year -- is below its 62% forecast. This shift suggests that returns and cash flow in the future might not be as high since oil fetches better margins than gas.

Investors are taking a "sell first, ask questions later" approach to Pioneer's guidance change. On the one hand, the production guidance reduction isn't significant because the company is holding back on purpose due in part to lower oil prices. However, the unexpectedly higher percentage of gas production is a bit more concerning because it could cause the company to generate less cash flow in future quarters, which might force it to water down its long-term growth plan. While that's certainly something investors should keep an eye on, Pioneer has a knack for innovation, which could enable it to crack the code that's currently impacting results. Furthermore, the company has one of the best balance sheets in the industry and sits on an enormous supply of low-cost hydrocarbons, which gives it the resources to create tremendous value for investors in the years ahead.