Royal Gold (NASDAQ:RGLD) stock keeps heading higher and higher -- with good reason. The company's growth investments are starting to pay off in a big way, leading to record revenue, operating cash flow, and dividends. Shareholders have been rewarded with some of the best returns of any gold stock, including a 220% return since early 2016.

Returns like that may have some investors wondering if it's too late to enjoy the company's growth. After all, precious metal stocks don't tend to perform well against the S&P 500 over long periods of time, so maybe the window for this streaming company has already closed. While you probably shouldn't expect triple-digit returns in the near-term, there are good reasons to believe the best is yet to come for Royal Gold stock. 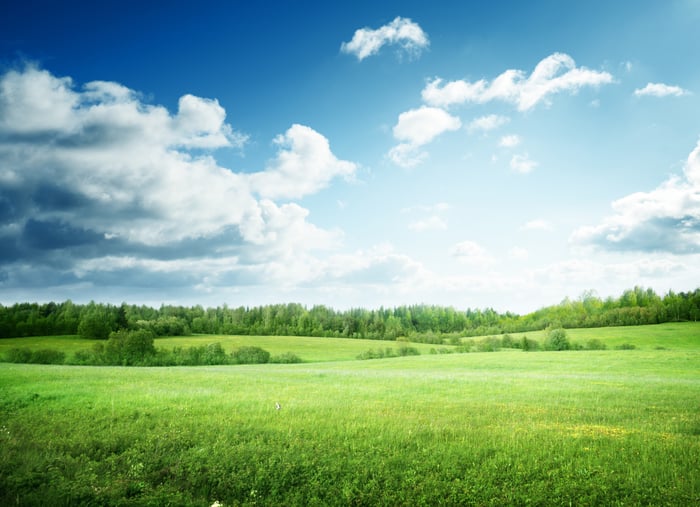 The good news is most of the share gains in the last two years have been driven by improving operations, not speculation. The better news is there are even more growth opportunities coming down the pipe that promise to lift revenue, profits, and cash flow in the near- and medium term.

Today Royal Gold generates streaming and royalty revenue from 38 operating mines across the world. When and where it makes sense the company has chosen to renegotiate streaming contracts to increase the value of existing mines. That was the case with the Pueblo Viejo mine in the Dominican Republic, which began delivering silver, in addition to gold, during the fiscal third quarter of 2016. 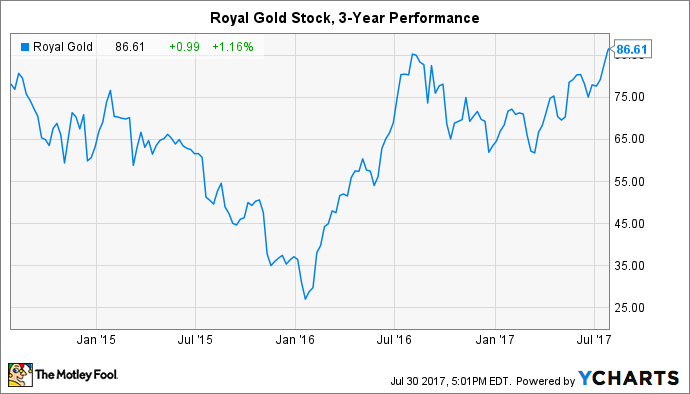 That single decision was a major driver of growth in the last year. Consider that revenue and gross profit from the mine for the first nine months of fiscal 2017 increased to $71.9 million and $50.4 million, respectively, compared to just $23 million and $16.4 million in the same period of fiscal 2016.

While it has interests in 38 operating mines, Royal Gold has interests in 194 total properties, including 22 development stage projects that are expected to come online in the next several years. Some projects may never mature, but there are three that investors should have on their radars:

The Rainy River project in particular figures to be strategically important for Royal Gold. Why? It will allow the company to diversify its revenue in the years ahead. Consider that for the first nine months of fiscal 2017 over 86% of revenue was derived from gold, with just 8% from silver.

The timing couldn't be better. The average selling price of the company's silver for the first nine months of the current fiscal year stood at $18.09 per ounce, up from just $14.84 per ounce in the same period of fiscal 2016. That's a 22% increase in selling prices. Gold prices have increased by just 10% over that time period.

The streaming agreement for Rainy River works out to 3.1 million ounces of silver and 230,000 ounces of gold. At an estimated mine lifetime of 14 years, total production averages out to an additional $23 million in revenue per year at current selling prices. That represents top line growth of about 5% from what may be expected from full-year 2017 revenue -- from just a single mine.

Combine this steady stream of new projects coming online with Royal Gold's newly improved revolving credit facility, which contains about twice the capital of its old credit facility, and aside from price drops, there isn't too much capable of holding back the company's growth potential.

Royal Gold offers investors a unique way to capitalize on gold mining while avoiding the costly and risky business of moving earth. That has allowed it to enjoy share growth that other gold stocks haven't come close to matching. Yet while it enjoyed triple digit returns in the last 18 months, taking a closer look at new projects coming online in the near future hints that the best performance is yet to come for this gold stock.

Here's Why the Best Is Yet to Come for Royal Gold, Inc. @themotleyfool #stocks $RGLD $GOLD $GG $NGD Next Article
Current