Wall Street wasn't a fan of U.S. Silica Holdings' (NYSE:SLCA) most recent earnings report. Even though the company grew sales and earnings were 10 times higher than the prior quarter, Wall Street wanted more.

It looks like Wall Street may get its wish in time, though, as management plans to spend on a new mine to meet booming frack sand demand in the Permian Basin. Let's take a look at U.S. Silica's most recent earnings results and what this new mine will mean to the company's short and long-term performance. 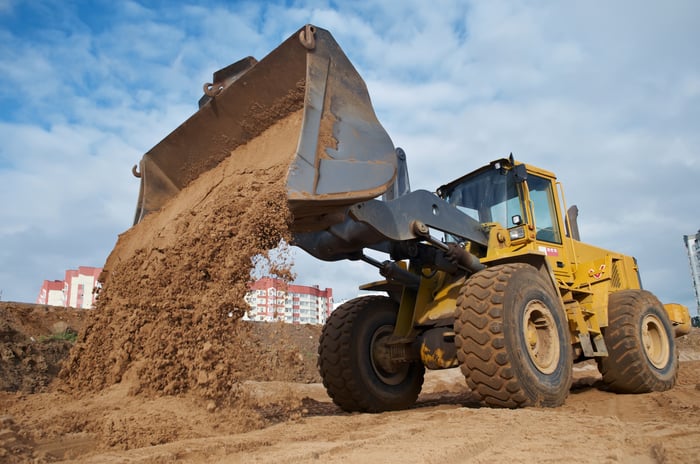 U.S. Silica's earnings struck the right chords this past quarter. Revenue was up modestly compared to the prior quarter, margins expanded, and the company produced a considerable increase in net income. Revenue growth has decelerated, but that is probably more a product of U.S. Silica's current sand mines running at full capacity than waning demand. According to CEO Bryan Shinn, U.S. Silica's current maximum capacity for the oil & gas industry is around 1 million tons per month. This quarter, oil & gas proppant sales were 2.75 million tons -- that's 917,000 tons per month.

As these mines get closer to running at full capacity, the market for sand is going to tighten and lift prices. We saw some of that effect this past quarter as contribution margins grew faster than revenue in both of U.S. Silica's business segments. The only negative note in this report was that in-basin sales for the oil & gas industry slipped from 67% of tons sold in the first quarter to 62% in the second quarter. Higher in-basin sales mean higher profit margins per ton sold, so ideally we would want to see this metric trend higher. 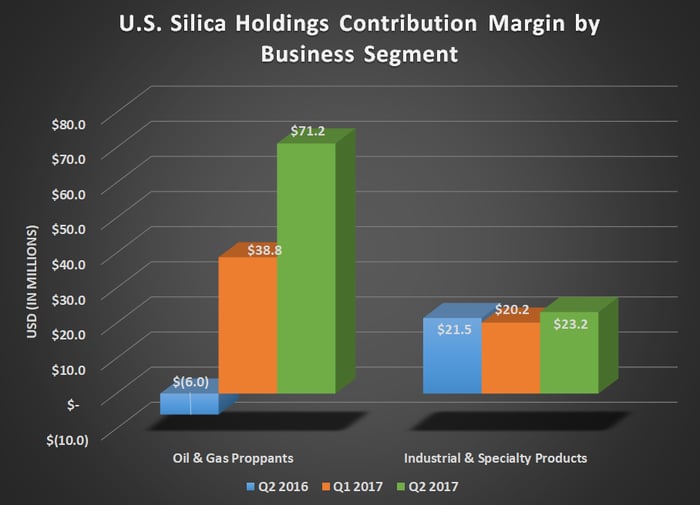 Frack sand companies have been scrambling to find new sources of sand. Those sources are even more valuable if they are close to centers of demand like, say, the Permian Basin in West Texas. Closer proximity to the customer means faster deliveries -- ideal for spot market purchases -- and lower transportation costs. That was the driving force behind U.S. Silica's Tyler, Texas acquisition last year.

This past quarter, the company announced a similar move to build a new mine in West Texas. The new facility is in-between both the Delaware and Midland Basins -- the two big shale formations within the Permian -- and will produce 4 million tons per year at peak capacity.

Management is moving fast on this project, too. It already broke ground on the facility and expects to deliver its first volumes by the fourth quarter. That accelerated development schedule is part of the reason why it will cost $225 million to get the facility up and running.

As part of the quarterly earnings release, management increased its capital spending guidance for the year. It now expects to spend between $325 million and $375 million. The increase is right in line with the cost of this new facility.

Shinn commented on the company's performance for the quarter and even hinted that this recent mine acquisition might not be the last deal U.S. Silica makes in 2017

U.S. Silica's strong second quarter performance reflects robust demand and pricing growth for frac sand and Sandbox last mile delivery services in our Oil and Gas business and another record quarter for our Industrials unit. We expect to see further strength in well completions and sand usage per well, leading to record 2017 business results and we also continue to work diligently on building out new capacity and potentially closing additional accretive acquisitions in both segments of our company.

It wouldn't be surprising if U.S. Silica's earnings results just hit their peak for 2017. Its current facilities are running at capacity, some of its competitor's mines will come on line in the coming quarters to put pressure on prices, and capital spending is increasing. These things will likely have an impact on earnings and cash flow the next couple quarters.

If you can look beyond the end of the year, though, U.S. Silica is making the right moves. Having a mine a stone's throw away from America's most prolific shale basins will likely lead to more sales at higher margins than proppant shipped all the way down from the upper Midwest. It's also encouraging to see that U.S. Silica has enough cash on hand to cover all of this spending right now, so there is little fear the company will get into debt trouble to complete these expansion plans.