Following the start of Tesla's (NASDAQ:TSLA) Model 3 deliveries on July 28, Tesla's second-quarter report gives investors a timely glimpse into the electric-car company's business. Tesla believes the important electric car will help take annual vehicle production from a run-rate of about 100,000 units today to 500,000 units next year. 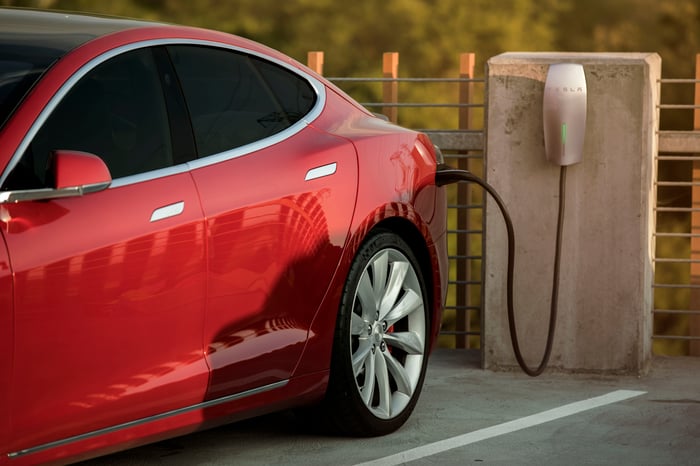 Tesla's 120% rise in revenue was driven by a 53% increase in vehicle deliveries, a smaller proportion of vehicles sold with Tesla's residual value guarantee (these vehicles are subject to lease accounting) than in the year-ago quarter, the benefit of incremental revenue from Tesla's late-2016 acquisition of SolarCity, and a seasonal bump in solar revenue.

Second-quarter capital expenditures soared 225% year over year and 80% sequentially, driven primarily by Model 3-related spending, including investments in production capacity, and expansion of Tesla's customer-support infrastructure ahead of the high-volume vehicle's production ramp-up.

Importantly, Tesla ended its second quarter with over $3 billion in cash.

Given how important the Model 3 is to Tesla's business, it's not surprising that the company's second-quarter update provided lots of information about the $35,000 vehicle. Here are some of the most interesting takeaways from the update about the Model 3: Though the Model S and Model X are Tesla's bread and butter today, the Model 3 will increasingly become the focus of investor attention as Tesla ramps up production of the new vehicle. To support its business growth, Tesla expects capital expenditures of $2 billion in the second half of the year, up from about $1.5 billion in the first half.

Finally, Tesla couldn't help but remind investors that it has another product unveiling around the corner -- its Semi truck.