Shareholders are right to be concerned about the declining revenues Kohl's (NYSE:KSS) reported in both 2016 (-2.7%) and the first quarter of 2017 (-3.2%). Some investors may also be worried about the traffic decreases that have impacted Kohl's, and other retailers, in recent months. Indeed, the retail world is facing challenges as consumers shift from shopping in stores to ordering products online, but that doesn't mean shareholders should bail on Kohl's just yet. It's worth taking a closer look at one smart strategy Kohl's is using to shake up its merchandise mix and meet customers' cravings for a specific category of brands.

What exactly is a national brand?

Like many department stores, Kohl's carries a blend of private, exclusive, and national brand merchandise. Both private and exclusive brands can only be bought at Kohl's, while national brands include well-known labels such as Nike that are sold at a variety of retailers. During the first quarter of 2017, Kohl's launched a new national brand, Under Armour, both in its stores and online. According to Kohl's CEO Kevin Mansell during the first-quarter conference call in May, the launch "exceeded a very aggressive ... sales plan with strong results across all categories."

This is impressive given that Kohl's didn't begin by offering just one category of Under Armour product, but multiple categories including footwear, accessories, and clothing for men, women, and children. This is also encouraging for investors, since it means Kohl's has found a brand its consumer base likes -- and is willing to spend money on.

With the Under Armour launch, Kohl's national brands collectively contributed 55% of all sales, up from 54% in 2016, 52% in 2015, and 50% in 2014. This increase in sales makes sense because Under Armour isn't the only national brand performing well for Kohl's. Mansell reported that "Nike continued their growth trajectory, and their business grew high single digits in the first quarter." He also stated, "We continue to believe strongly that there'll be more opportunities for additional new brands in additional areas of the stores." 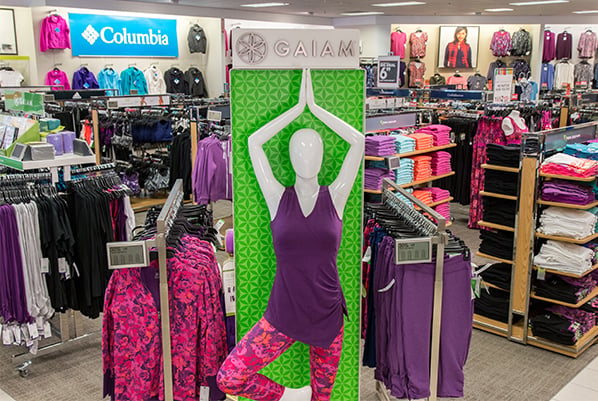 This statement should encourage investors, as it shows management's willingness to listen to consumers, and let their increasing demand for national brand goods shape the Kohl's merchandise mix. Management recognizes national brands' potential to drive top-line growth. National brands generally have a higher selling price, and could even drive people into the store, potentially offsetting brick-and-mortar traffic decreases. After all, many customers aren't familiar with Kohl's private label brands, and wouldn't make a special trip to buy, for example, a Croft & Barrow product. But they may make a trip to buy, or at least check out, Kohl's Under Armour merchandise.

Investing in national brand inventory also can be less risky than investing in private brands, since customers usually have a preconceived idea of the quality and prestige of national brand products. Even if, say, a mustard yellow Nike sneaker doesn't sell well and Kohl's has to mark it down, people will likely recognize the value of the product based on the Nike logo alone. Conversely, if Kohl's marks down private label products, customers may struggle to evaluate the true value of the good and whether it is worth the price on the ticket.

Some investors may be concerned that the shift into national brands could represent gross margin risk, which is valid, as national brands typically produce lower gross margin rates than national and exclusive brands. However, there is some evidence that attempting to force-feed customers less desirable private brands can be just as detrimental to business. Kohl's reported in its first-quarter conference call that, "Women's and children's performance was impacted by soft private brand results." While those areas showed weakness, Mansell noted that Under Armour performance "exceeded our expectations from every perspective, in every single category in which we launched it." And Mansell doesn't view Under Armour's success as a fluke -- he asserts that "... being the destination for important brands is a critical component of our success."

In short, investors should feel reassured that Kohl's is maintaining a strong customer-oriented focus. Given today's uber-competitive retail environment, it's more important than ever for retailers to carry the right product, in the right place, at the right time. By increasing its investment of in-demand national brands, Kohl's is delivering the correct products. Increasing the penetration of national brands may be a key component in Kohl's fight to minimize eroding traffic and deliver the top-line growth investors are looking for.