Liquidity Services (NASDAQ:LQDT) aims to offer bargains to shoppers by obtaining unwanted inventory from government and business clients and selling it at a profit. That business model had a lot of promise during the late 2000s and early 2010s, when the economy was emerging from recession and low-priced goods were a necessity for consumers. More recently, though, Liquidity Services has struggled as key contracts from the U.S. Department of Defense have diminished in scope. The company has had to respond with aggressive measures to seek new growth opportunities.

Coming into Thursday's fiscal third-quarter financial report, Liquidity Services investors were prepared to see sales declines and red ink on the bottom line. Revenue plunged far further than most had expected, but net losses weren't quite as bad as feared, and that inspired some hope among those who watch Liquidity Services. Let's look more closely at what the surplus specialist said and whether its results are likely to improve in the near future. 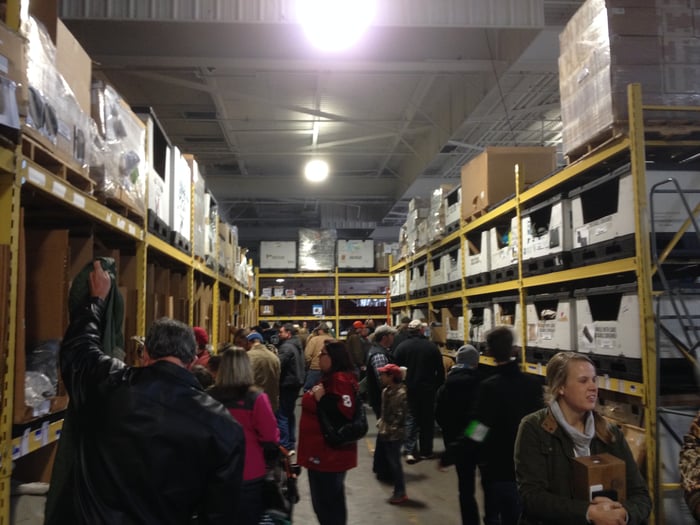 Liquidity Services' fiscal third-quarter results reflected tough conditions in the retail industry. Revenue fell 23% to $65.5 million, which was far worse than the 8% decline in the top line that most of those following the stock had expected to see. Liquidity Services posted an adjusted net loss of $7 million, and although that was a reversal from the $2.1 million adjusted profit in the year-ago period, the resulting net loss of $0.22 per share wasn't quite as bad as the consensus forecast among investors for $0.25 per share in red ink.

Looking more closely at the report, Liquidity Services' operational results continued the adverse trends that we've seen in past quarters. The company did attract 5% more registered buyers, weighing in at 3.11 million. Yet just because buyers registered doesn't mean that they actually made bids at auctions, and the number of auction participants was down 10% to 577,000. Completed transaction counts also declined, falling 11% to 134,000.

Liquidity Services saw wide variations in performance in different areas of the market. The company's GovDeals state and local government marketplace saw impressive gains in gross market value, revenue, and gross profit, all of which climbed by percentage figures in the high teens. The retail supply chain marketplace segment posted a 5% gain in gross market value, although revenue and gross profit figures were down slightly from year-earlier levels. Where Liquidity Services really took a hit was in its capital asset group segment, where gross market value plunged by a third and resulted in even steeper declines in sales and gross profit. The company blamed lower client sales activity and delays in large asset sales, as well as reduced service fees from the Defense Department.

CEO Bill Angrick took the results in stride. "While we saw less client sales activity among industrial accounts in the [capital asset group] segment in Q3," Angrick said, "overall trends in globalization and innovation are driving the need for our sales channels and services." The CEO also noted that the company should benefit from the rise of online retail, because e-commerce retailers will need an exit strategy to resell returned products.

Liquidity Services kept talking about the new marketplaces it has in its pipeline. Angrick discussed the global energy marketplace Network International, which has been put on the company's new LiquidityOne e-commerce platform. As the CEO noted, "The integration of our remaining legacy marketplaces onto our LiquidityOne platform is underway to aggregate our buyer base and add key functionality for our seller-clients."

Yet Liquidity Services is cautious about the near-term future, because implementing LiquidityOne will be expensive, and other business headwinds are likely to persist. Accordingly, Liquidity Services set its fiscal fourth-quarter guidance for gross market value of $145 million to $165 million, with expected adjusted net losses of $0.22 to $0.32 per share. That's considerably worse than the consensus forecast among investors, but if the investment in new technology proves successful, then long-term profits should outweigh the near-term hit to the bottom line.

Liquidity Services' shareholders seemed to accept that longer-term thesis, and the stock had risen 3% at midday following the announcement. Investors can be forgiven for getting impatient, but many are still hopeful that Liquidity Services can turn things around and start growing again.