President Donald Trump put his support behind an immigration plan Wednesday that would cut the number of legal immigrants allowed into the United States. The proposal, which was sponsored by Republican Sens. David Perdue and Tom Cotton, would favor applicants based on their skills, their education, and their language ability rather than family ties to people in the country, according to The New York Times. It is estimated to cut the number of legal immigrants by half over a 10-year period.

Trump described the proposal in a White House press release as a way to protect American jobs by reducing the number of unskilled immigrants allowed into the country. The proposed system would grade potential immigrants on factors including whether they speak English and other factors related to their ability to work in the U.S.

"The current, outdated system depresses wages for our poorest workers and puts great pressure on our taxpayers," Trump said in February, according to the press release. "Switching away from this current system of lower-skilled immigration, and instead adopting a merit-based system, we will have so many more benefits. It will save countless dollars, raise workers' wages, and help struggling families -- including immigrant families -- enter the middle class," he also reportedly said in February.

The theory is that allowing unskilled workers into the country creates a drain on resources. The White House press release said that "more than 50 percent of all immigrant households receive welfare benefits, compared to only 30 percent of native households."

But before you can judge this immigration proposal, you need to look at the jobs lawful immigrants actually fill. 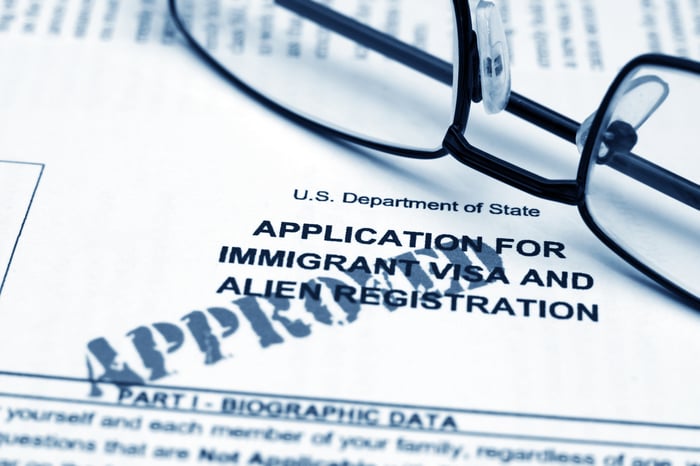 What jobs do lawful immigrants hold?

Pew Research released a study in March of what jobs lawful immigrants held based on 2014 government data. The researchers found that about 19.6 million immigrants were working legally in the U.S., about 12.1% of the total workforce. Pew pulled out the industries in which immigrants make up more than half the workers and broke out percentages by lawful and unauthorized immigrants. Here are the "lawful" numbers:

The vast majority of the U.S. labor force is concentrated in a small number of professions, according to Pew. In fact, the 10 biggest-employing industries are the same for U.S.-born and lawful immigrant workers.

Cutting immigration would open up jobs, but it's hard to see how it would open up many high-demand positions. What the proposal would do is create more demand for native-born workers in a number of professions that are currently dominated by immigrants. Fields like retail and the restaurant industry already struggle to fill positions in a strong economy.

It's also reasonable to ask if, in a market with 4.4% unemployment, where the biggest problem is arguably people being underemployed, keeping lower-skilled workers out solves an actual problem. The U.S. does not just need more jobs, it needs more high-paying jobs and those largely are not the positions being filled by lower-skilled lawful immigrants.